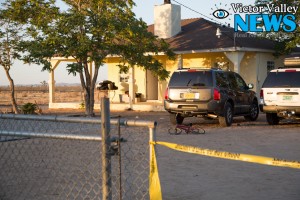 ADELANTO-(VVNG.com): Julio Cervantes Jr., 40 of Adelanto appeared in court on Thursday morning to for an arraignment hearing for the Involuntary Manslaughter of Daniel Cervantes, his 7-year-old son.

Cervantes, who is currently out on bail, pleaded not guilty on Thursday, August 13th to all charges, including special allegations due to the use of a 9mm semi-automatic firearm during the commission of the alleged crime.

The arrest occurred on the early morning hours of June 12th following the June 11th incident taking the life of the small child. At about 4:54 p.m. on June 11th, dispatch received the report of an accidental shooting in the 18700 block of Bellflower Street. Just minutes after the call, both an ambulance and deputy arrived to the home to render aid to the 7-year-old boy.

Daniel Cervantes was transported by ground ambulance to Victor Valley Global Medical Center where at 5:59 p.m. he was pronounced deceased.

The home sits on the same property as the church, Iglesia Evangelica Cristiana Espiritual in Adelanto, where Cervantes Sr, was the pastor. On the day of the shooting, the congregation was preparing to begin their 7 0’clock service when they noticed the home being closed off by crime scene tape.

Church members told Victor Valley News reporters the family had just arrived from New Mexico the previous night, and were preparing to unpack and move into their new residence.

The church members had no idea that a tragic event had taken place at the pastor’s home, but grew concerned as crime scene investigators and major media outlets began arriving on scene.

At 3:30 a.m Cervantes was taken into custody on charges of Involuntary Manslaughter and was booked into the High Desert Detention Center in Adelanto.

Cervantes is being charged with one Felony count of Involuntary Manslaughter without malice due to the accidental shooting of his son.