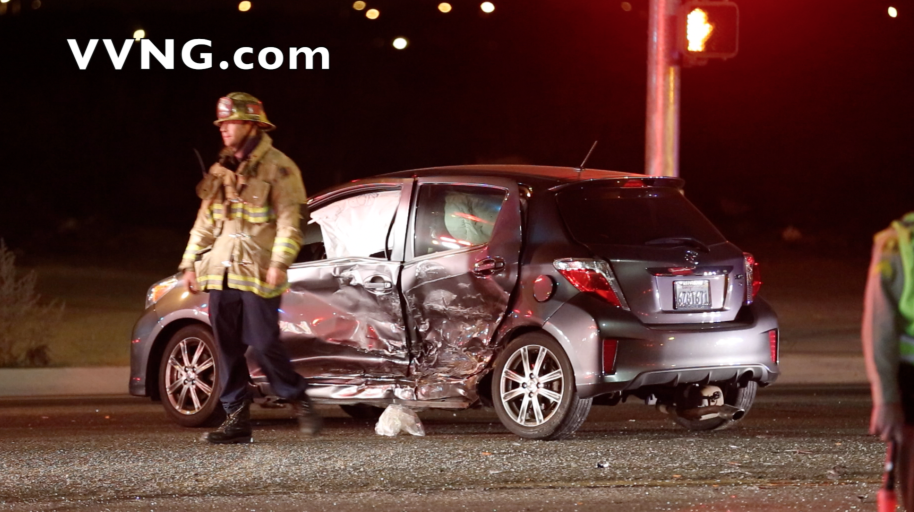 According to a witness, a Toyota Yaris was exiting the Stater Brothers shopping center and the driver ran the red light. The driver of a BMW was traveling eastbound on Palmdale Road when the two vehicles collided in the intersection. The witness also stated she saw several males running from the BMW and throwing beer cans into the desert.

Upon arrival police discovered the passengers of the BMW had fled from the scene.  The driver remained on scene and cooperated with authorities. The unidentified male driver was given a field sobriety test and a short time later was taken into custody.

The impact caused the female driver in the Toyota Yaris to become trapped and required to be extricated from the vehicle. The unidentified female was transported by ground ambulance to a local hospital with unknown injuries.

Police requested the Sheriff’s aviation unit to search the open desert area near Pearmain Street for the outstanding occupants of the vehicle. No information was immediately available on if any arrest had been made.

At this time the official cause of the accident is under investigation. More information will be posted as it becomes available.

For the latest news be sure to join the largest social media group in the Victor Valley “VVNG” www.facebook.com/groups/victorvalleynews.