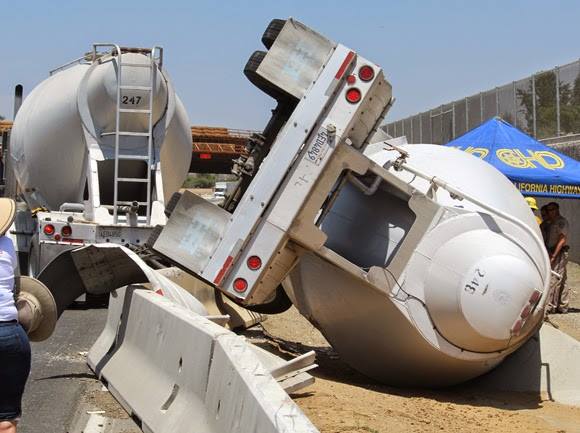 PERRIS:(VVNG.com)- At approximately 10:05 a.m. a tractor-trailer crash into the under construction overpass on Interstate 215, south of Nuevo Road in Perris caused a partial collapse. The partial bridge collapse caused the northbound freeway closure which is expected to be reopened on late Tuesday night or early Wednesday morning..

“I was at work right there and heard a loud boom! Almost sounded like an airplane or something with metal hitting, it was pretty frightening,” said Kerry McCoy.

According to CHP incident logs, the tractor-trailer carrying sand struck the bridge subsequently causing the trailer to land on it’s side. A SigAlert was issued due to the accident causing closure to northbound and southbound lanes of the freeways rerouting traffic to 4th street.

The accident, which is now impeding the progress of the State Route 74 interchange project caused no injuries. The exact cause of the crash is unknown at this time.