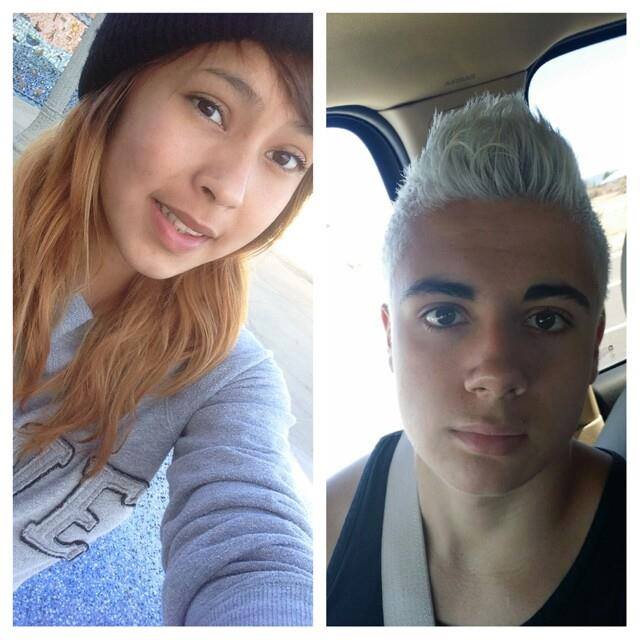 UPDATE: (7/24 @11AM)- Karen Gonzalez shared that she received a call from her son Justin this morning at approximately 4:30am.

“They were staying three houses down from me in vacant house that had water, hot water, filtered water, electricity and even a microwave,” stated a very relieved Karen.

Thank you to the public for sharing the post and helping these worried parents search for the teenagers.

OAK HILLS:(VVNG.com)- Justin Jimenez, 15 left home in the Oak Hills area, with his girlfriend Katherine Cruz (Kat), 15 on Friday night. At the time he had approximately $40 in his possession.  His mother described him as a good kid and a boy who participated in the football team at Oak Hills High School. Justin is approximately 5’7  and 160 pounds. His hair is bleached white blonde with dark roots. He has hazel eyes, very light brown with a yellowish tint according to his mother.

Justin and Kat do not have cell phones at this time. According to his mother when he had left home on Friday night he was not angry and made plans with his younger sister for the following morning. She also mentioned that he is open with her and has expressed that he trusts his mother. Justin has not been seen since Friday night but his mother believes he returned home on Sunday, July 20th while they were out looking for him to get blankets and his gray Obey hat.

Justin’s mother expressed fear for her son and his girlfriend being out alone but felt relief to know they had returned in order to retrieve the items they did. “I’m disappointed that he would not at least call to say that he is okay,” said his mother, Karen Gonzalez.  She feels that since the teens time together and even communication has been limited that the young couple have run away to be together.

The families are deeply concerned with their children’s well-being and appreciate the public’s support in sharing their pictures. Karen also mentioned that some have reached out to her wanting to help in the search. She would like to get an organized effort together this weekend if they are still not found by then.  Until then she is searching and hopes others will look out for the two of them also.

If seen or if you have any information that will help locate them, please call the Hesperia Police Department at (760) 947-1500.