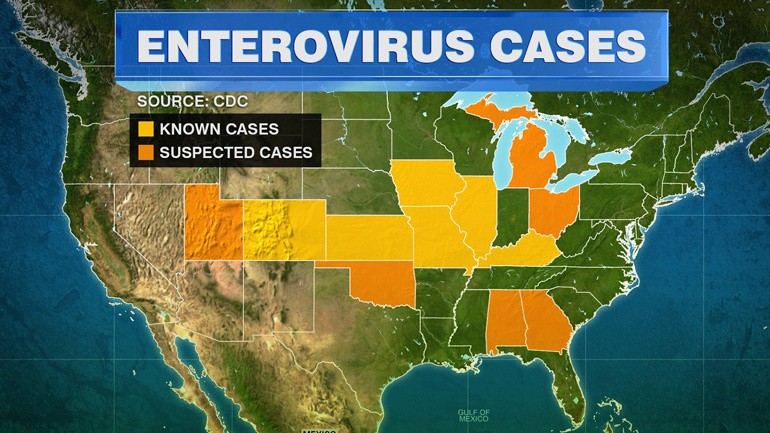 (VVNG.com)- A virus identified as Enterovirus D68 is a form of the virus that causes the common cold, but has made many children with respiratory illnesses such as asthma very ill. The illness is said to have sickened hundreds of children in dozens of states in the United States, which has become a cause of concern for health officials.

Although no deaths have been reported due to EV-D68, parents are concerned about respiratory distress that it may cause to their asthmatic children. In order to find the presence of EV-D68 special tesare required  to identify it. Although this virus was identified in California in the early 60’s there were only 79 reported cases from 2009-2013 in the entire United States. This virus is being studied, but currently has been associated with respiratory illnesses and even neurological conditions such as meningitis and encephalitis.

Symptoms, which are similar to those of a bad cold, can cause those with respiratory illnesses to require hospitalization due to complications. In August of this year the CDC was alerted that a Kansas City hospital had an increased number of patients hospitalized with severe respiratory illnesses including more than 500 of those being children. Later that month they also received notice from a Chicago hospital of the same type of increase in respiratory related hospitalizations. Nearly ⅓ of the children, mostly those considered medically fragile are currently being hospitalized in their pediatric intensive care unit are suspected to have the virus.

Officials stress that parents should not panic on the presence of the common runny or stuffy nose. If there are breathing issues like wheezing or other difficulty breathing, parents should immediately seek medical assistance. Parents who have children with asthma should make sure their asthma is well controlled and the child is taking their regular medications. There is no specific treatment or vaccine for EV-68, causing many to fear this virus.

Although a late summer and early fall raise in illnesses is to be expected with children going back to school, it is recommended you take precautions to avoid the spread of illness. Teaching your children ways to fight germs is important in stopping the spread of virus.

A few tips to avoid illness would be: