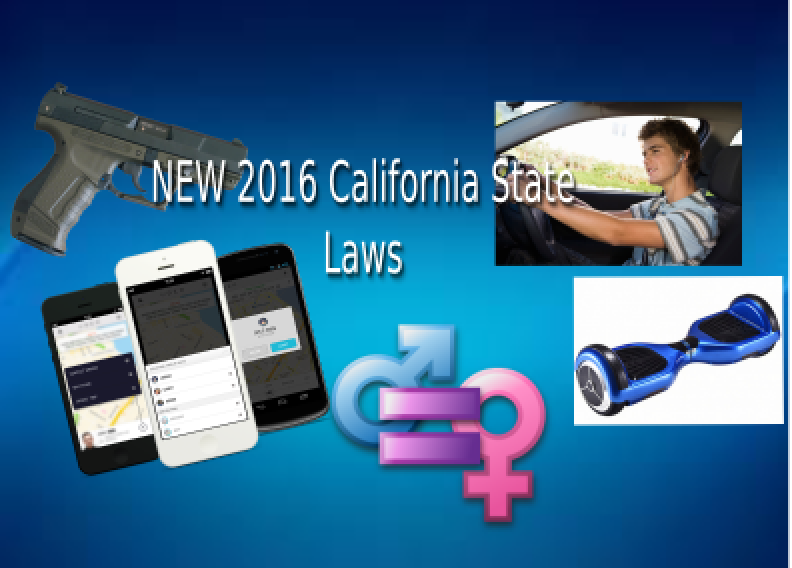 SACRAMENTO-(VVNG.com):  Just like every year proceeding, the state of California will be enacting several new laws for 2016. Some will be met with displeasure, and some will be welcomed in for the new year. Here are just some that Californians can expect to see. One that most are aware of, is the full one dollar per hour raise taking minimum wage to $10 an hour.

SB 491 makes it unlawful for drivers or bicyclists to wear a headset, earplugs in, or earphones covering, resting on, or inserted in, both ears. This does not apply to those operating authorized emergency vehicles, construction equipment and refuse/waste equipment .

AB 604 The law will limit those riding electronically motorized boards to individuals 16 or older and will require the use of a bike helmet, safety equipment to increase night-time visibility and will limit use to roads with speeds 35 miles per hour or less. It is also a crime to operate while under the influence of drugs or alcohol.

AB 1422 will require Transportation Network Companies (TNC) to participate in the DMV’s Employer Pull Notice (EPN). TNC’s include companies where a private vehicle is used to provide paid rides to the public like Lyft and Uber. The program will provide each TNC with a report with the driver’s current public record which will include immediate notification of moving violations, accidents, drivers license suspension, and other actions taken against driving privileges.

AB 1461 Those qualified to vote will be automatically registered when they apply for a driver’s license or change of address at the DMV.

AB 1465 In order to bring the DMV into compliance with federal law, the DMV will require an applicant for an original driver license or identification card to provide proof of California residency starting July 1, 2016.

SB 199 in order to boost gun safety, will require BB and Airsoft guns sold in California to include fluorescent markings to distinguish them from real firearms.

SB 358 will prohibit employers from paying employees of the opposite sex different pay rates for similar work. An employer will be required to show that the difference in pay was due to a seniority system, merit system, a system that measures earnings by quantity or quality of production, or a bona fide factor that is not based on or derived from a sex-based differential in compensation.

AB 827 Safe schools: Safe Place to Learn Act: lesbian, gay, bisexual, transgender, and questioning pupil resources. This bill would require the department to also assess whether the local educational agency has provided to certificated school site employees who serve pupils in any of grades 7 to 12, inclusive, information on existing school site and community resources related to the support of lesbian, gay, bisexual, transgender, and questioning pupils, as specified.