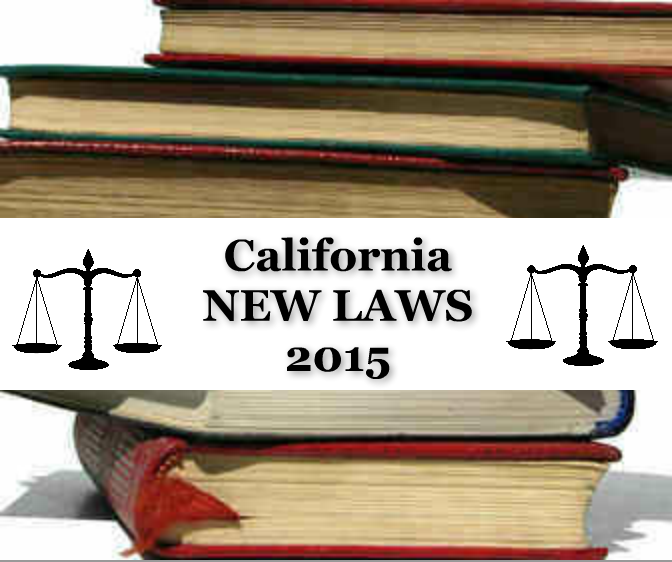 VICTOR VALLEY:(VVNG)- Laws laws and more laws; over 900 new ones, yes, in the great state of California. Most laws were bills signed into law by Gov. Jerry Brown and may have a dramatic affect in how California does business, the impact on crimes, criminals, and the statutory laws that will be changing.

Some of them are listed below. Most are for good but others, people have raised a few eyebrows over. This is a synopsis of some that may affect you In one way or another. Some laws are great, some not so good and some almost unenforceable. You be the subjective judge. Some laws are the first in the country to be activated. Only time will tell if they will work.

The legislature has sure been busy let’s hope for the best:

What it says: Beginning on July 1, employers must pay sick leave to any employee who works for at least 30 days within one year. It applies to full-time, part-time, temporary, migrant and seasonal employees. Small businesses are not exempt.

That conduct is defined as something that “a reasonable person would find hostile, offensive, and unrelated to an employer’s legitimate business interests.” Acts can include “repeated infliction of verbal abuse…verbal or physical conduct that a reasonable person would find threatening, intimidating, or humiliating, or the gratuitous sabotage or undermining of a person’s work performance.”

The law “does not create a cause of action for abusive conduct in the workplace, but it does appear to be the first step toward protecting workers against bullying in the workplace that is not linked to any form of illegal discrimination.”

What it says: Defines “foreign labor contractor” as a person “recruiting or soliciting for compensation a foreign worker who resides outside of the United States in furtherance of that worker’s employment in California.”

What it means: Foreign labor contracting will be more regulated in California and foreign workers more protected.

This was one of the most-talked about laws passed in 2014, when California became the first state in the nation to ban the use of single-use plastic bags at places like grocery and drug stores. This starts going into effect in July.
AB 60,

Under this law, which went into effect with the new year, the DMV is required to issue a driver license to any applicant “…who can prove identity and California residency, and meet all other licensing requirements, such as passing the driver license knowledge and behind-the-wheel driving exams.” Long lines are expected at the already-infamously packed DMV in the coming weeks.

The so-called “Affirmative Consent” bill, is intended to eliminate college date rapes by forcing all colleges and universities in California, including community colleges, to adopt protocols for complaints. As the law reads, both parties must give spoken consent for sex; silence is not considered consent and any sex act must be consensual THROUGHOUT the act.

Don’t be surprised if you start spotting more pooches while you’re eating out. This bill was signed into law in August and gives restaurants the option to allow pet dogs in their outdoor seating areas under specified conditions unless a local ordinance determines otherwise.

Passed in the wake of a terrible tragedy near UCSB, this law allows for the temporary removal of firearms from individuals who are deemed at risk for committing acts of violence.

Yes, you read that correct. Prisoners, who aren’t technically supposed to engage in sexual relations, will all soon have access to condoms. The lawmaker who spearheaded this bill says the goal is to reduce HIV infections in state prison and that “…AB 966 requires the California Department of Corrections and Rehabilitation (CDCR) to develop a five-year plan to distribute condoms in all state prisons.”

On my next article we will go deeper into statutory criminal laws.

[author image=”https://vvng.wpengine.com/wp-content/uploads/2014/12/kevin1.jpg” ]Kevin Buchanan is a former 9 year Sheriff’s Patrol Deputy in the Victor Valley. He has lived in the Victory Valley for over 40 years and served his community as a firefighter and on an emergency ambulance.[/author]