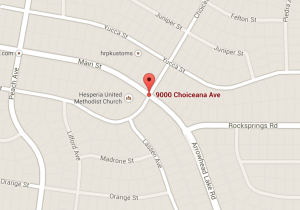 Dispatch communications center received a call reporting multiple subjects fighting outside of a residence in Hesperia on January 26, at about 1:30 p.m.

Additional calls to Sheriff’s Dispatch reported multiple victims, some with stab wounds, according to a release.

Police officer’s were dispatched and responded to a fight at a residence within the 9000 block of Choiceana Avenue.

Deputy Greg Gary, who was in the area, observed a vehicle believed to be involved in the incident leaving the location. Deputy Gary stopped the vehicle which was occupied by 5 adults.

One male in the vehicle was suffering from serious head injuries and was subsequently transported to a local hospital. The other occupants were also detained for further investigation.

Upon arrival at the Choicieana address, Hesperia deputies contacted 5 additional subjects all of which were detained. In the residence officers located 2 men with serious non-life threatening injuries.

A male adult suffering from multiple stab wounds to the chest, was airlifted to ARMC for treatment. A second male adult with a laceration to his torso was treated and released at the scene.

Detectives from the Hesperia Station were called to assist deputies at the location. It was discovered that all subjects were acquaintances. Detectives are working to identify a motive and determine what involvement the parties had.

Anyone with information regarding this case is asked to please contact Detective Mark Smith or Detective Sergeant Doug Hubbard at 760-947-1500.

Citizens are encouraged to contact the Sheriff’s Department or WE-TIP INC 1-800-78-CRIME, www.wetip.com to report suspicious or criminal activity and can remain anonymous.