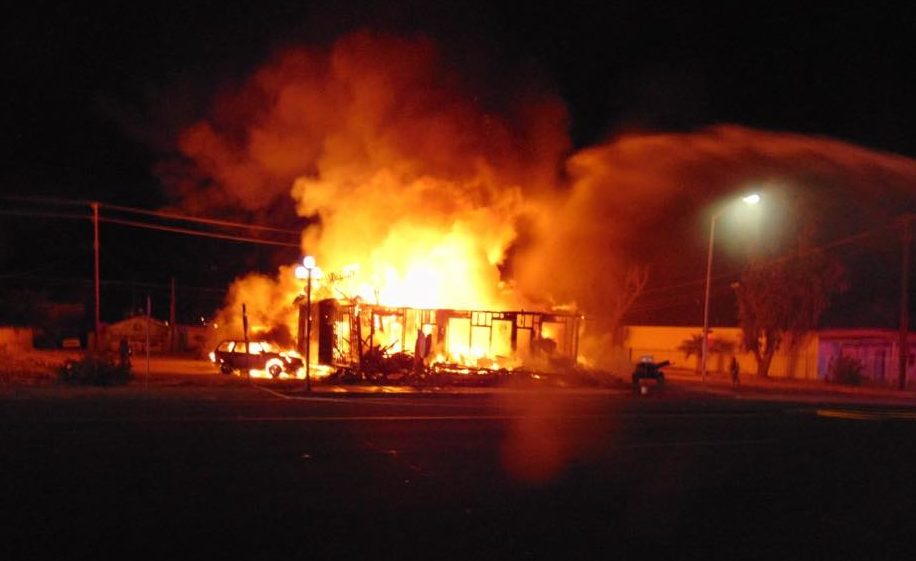 NEEDLES, Calif. (VVNG.com) — One person was killed and a second was badly burned after a house fire in Needles, officials said.

On Tuesday, April 2nd, at 9:46 pm San Bernardino County Fire responded to multiple reports of a structure fire near the intersection of J Street and West Broadway in the city of Needles.

Additional 911 callers stated that they could hear yelling inside the structure.

Firefighters arrived to discover a single-story residence fully involved in fire. Sustained winds over 20 mph were pushing the blaze through the entire structure.

With life safety as their top priority, firefighters attempted to make entry into the building but were pushed back by extreme fire conditions. An occupant who had exited the structure prior to arrival was assisted by the fire crew.

Due to the percentage of fire involvement, energized power lines down around two sides of the building, and an exposure threat to surrounding residences, firefighters engaged in a defensive attack in an attempt to limit the spread of the fire. Multiple explosions were heard during the initial stages of the fire attack.

County Fire personnel were reinforced by engine companies and chief officers from the Mohave Valley and Golden Shores Fire Departments. Firefighters were ultimately able to gain control of the blaze approximately thirty minutes into the incident and confined the burn to the building of origin.

Of the two occupants who were in the structure at the time of the fire, one suffered fatal injuries. The second victim, an adult female, was airlifted to University Medical Center – Las Vegas for treatment of serious burn injuries. There were no other injuries reported on scene.

Damage estimates were not available at the time of this release. The structure which had several add-ons was destroyed and is a complete loss. The explosions were attributed to numerous gas cylinders located inside of the residence. The cause of the fire is under investigation through County Fire’s Office of the Fire Marshal and San Bernardino County Sheriff’s Arson/Bomb detail.