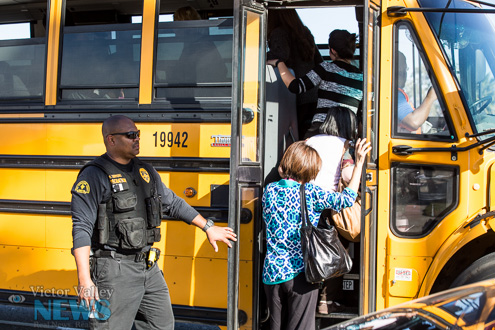 SAN BERNARDINO-(VVNG.com):  The Wednesday, December 2, 2015 began as a festive day at the the Inland Regional Center located on the 1300 block of South Waterman Avenue in San Bernardino. Everything changed when at about 11:00 a.m. when during a holiday party three masked gunmen entered a large conference room filled with San Bernardino County Health Department employees. The building, usually only accessible by those with badges was left unlocked for those attending the holiday party.

Initial reports indicated that the suspects were all men wearing black clothing, tactical vests and ski masks. The shooting appeared, according authorities, to be well planned as the three walked in with assault rifles and visibly carrying additional ammunition on their bodies.

County buildings, shopping malls, and schools were placed on lockdown as the search for the masked gunman continued through the streets of San Bernardino. The center, that offers services to developmentally disabled individuals and those serviced by the center were shocked that the place that services their children was the target of such an attack. People in the building reportedly hid locked inside offices and came out of hiding with their hands up until they were identified by authorities that were uncertain of where the shooters were.

An on scene officer was hit by a ricocheting bullet during the shooting in the area of Richardson street and San Bernardino avenue.  As police on scene returned fire to the suspect vehicle finally disabling the bullet riddled vehicle. Two suspects fled the vehicle on foot, one male suspect was shot and killed and a female suspect was shot and killed while in the vehicle. The vehicle was cleared of any explosive devices the San Bernardino County Sheriff’s Department officials said.  A third suspect was at large until about 5:40 p.m. when the person of interest was detained.

Through the search of the building, a suspicious item, believed to be an improvised explosive device (IED), which the bomb squad was called in to safely dispose of it. According to San Bernardino County Sheriff’s Department officials, 17 are wounded and 14 are confirmed deceased as a result of this mass shooting. There is no known motive at this time. “Authorities are searching a Redland home that is believed to be the home of one of the suspects.

“According to the Association of Regional Center Agencies, we have received word from the Department of Developmental Services that all Inland Regional Center clients and employees are reported safe,” said RCOC Executive Director Larry Landauer, on a Facebook post.  Sheriff McMahon said in a statement, “Our hearts go out to the victims, family and friends of this tragic incident.”

At this time the motive of the shooting is, one of the shooters was identified as County Inspector, 28-year-old Syed Farook.  Farook was said to have worked for the county for over 5 years and was well-liked by his collegues. Authorities said that at one point Farook was in attendance at the party, but according to those also in attendance he was quiet and left abruptly. He later is believed to have returned with the two other suspects. Farook is confirmed to be the deceased male suspect.

Farook’s brother-in-law,Farhan Khan said at a press conference that he was a U.S. Citizen that he believes was born in the United States.  His brother, who has yet to be identified,was detained, but authorities say he may not have been involved in the shooting. The female suspect according to multiple reports is 27-year-old Rafsheed Malik, the wife Farook that returned to the United States with him after a recent trip to Saudi Arabia. 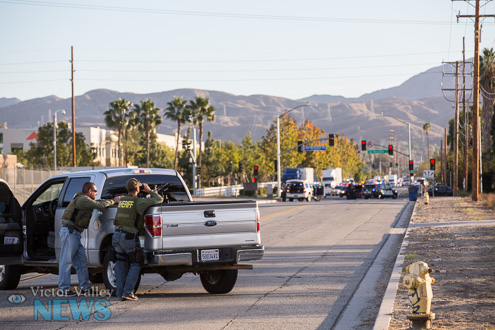 Armed officers near the intersection of San Bernardino Avenue where two of the gunmen in the mass shooting were killed. (photo by Hugo C. Valdez, Victor Valley News) 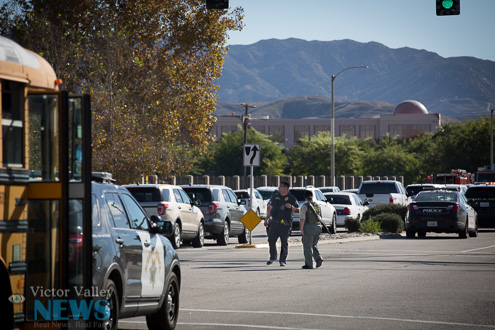 Armed officers at the intersection of Orange Show Road and Waterman Avenue. In the background is the Inland Regional Center building, where a mass shooting that claimed the lives of 14 people occurred. (photo by Hugo C. Valdez, Victor Valley News)