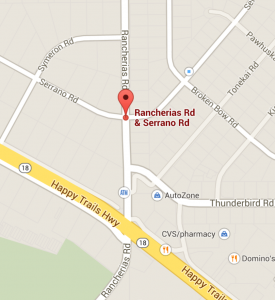 APPLE VALLEY: Officers are currently working a crime scene after receiving calls of shot’s fired in the area of Serrano road and Rancherias road. Officers were dispatched to an apartment complex just after 10:00 p.m. on Tuesday.

Upon arrival, at least one victim was declared DOA (dead on arrival) by AMR. A second victim possibly a female, was reportedly down near the apartment with unknown injuries.

The suspect is described as a black male adult 6’0″, 200 lbs., with dread locks, and allegedly known as “JB” around the neighborhood.  The suspect fled on foot in an un-known direction and is believed to be a transient in the area.

San Bernardino Sheriff’s helicopter (40-king) is currently assisting in searching for the suspect.

At this time no motive is clear and it’s believed the victims possibly knew the suspect and may have been involved in a prior altercation. .

Police are on scene assisting with crowd control and a perimeter has been established around the crime scene perimeter. More information will be updated as it becomes available.