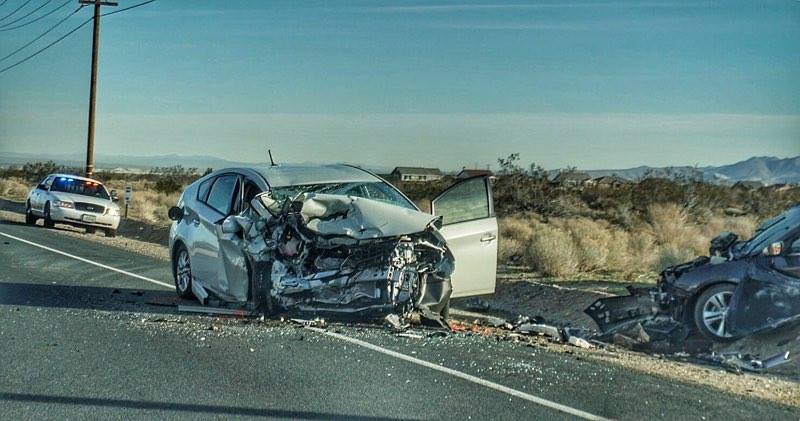 VICTORVILLE-(VVNG.com): A man was airlifted after a head-on traffic collision on northbound Highway 395 near La Mesa Road on Tuesday morning. The vehicles involved were a white Prius and a black sedan.

The collision occurred at about 7:21 AM., and was first reported as a traffic collision with extrication, but the occupant was able to be removed from the vehicle cancelling the extrication.

A witness on scene told Victor Valley News that the black car was heading southbound when for unknown reasons it veered into northbound lanes colliding head-on with the white Prius.

“I saw the gentleman in the white car jump out and run to the darker car to help, but he couldn’t get that person out,” said witness Melissa Victoria Espinoza. The male occupant of the black sedan was transported by ground ambulance to Fire Station 319, located at 18500 Readiness Street to prepare to be airlifted to Arrowhead Regional Medical Center.

Northbound Highway 395 traffic was shut down temporarily for debris clean-up and towing of the two vehicles. No other injuries were reported as a result of the collision. The cause of the collision is still under investigation.