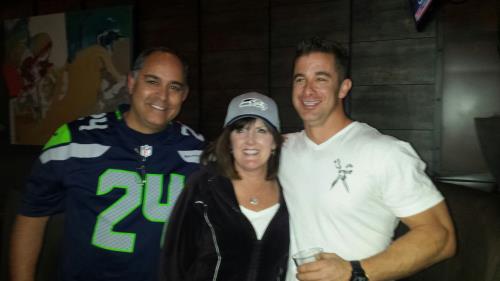 LAS VEGAS: The San Bernardino County and Clark County Fire Departments routinely respond together for emergency incidents which occur in the Interstate 15 corridor around the California/Nevada state line, however a recent event caused an unexpected meeting of the two agencies.

On Sunday afternoon, while enjoying the football game at The Yard House’s Town Square location, this group of firefighters noticed a commotion at an adjacent table. They quickly identified Susan Sanders, a 51-year-old Las Vegas resident, with significant difficulty breathing. As a crowd began to develop, the firefighters stepped in and escorted the victim outside while asking the restaurant staff to call 911.

Once outside, Susan, who had initially been coughing, suffered a complete blockage of her airway. Recognizing this life-threatening situation, off-duty firefighter/paramedic Rob Cisneros unhesitatingly administered the Heimlich maneuver. This act dislodged a piece of food that was in Susan’s trachea and immediately restored her ability to breathe. Rob and his partners continued to monitor and evaluate her as her level of distress continued to diminish.

Clark County Fire Department paramedics quickly arrived and assumed care for the choking victim who stated that she was feeling much better. After a thorough assessment and evaluation by Clark County Fire personnel, Susan declined further treatment and/or transport to the hospital.
San Bernardino County Fire Engineer/Paramedic Bob Mack, Cisneros’ partner, stated, “I’ve been a paramedic for over 20 years, and this is only the second time I’ve seen the Heimlich used. Rob’s quick actions absolutely saved her.”

Everyone returned back to the Yard House to enjoy the rest of the game with their new friends. Susan, an admitted Broncos fan, made light of the situation. “Denver choked, and so did I.” The firefighters even brought Susan a piece of their birthday cake to help celebrate her new life. Susan and her family thanked her rescuers and posed for a few pictures before heading home.

For information on how to learn CPR including the Heimlich maneuver and where to find a class, please go to www.sbcfire.org and look at our Links of Interest.

The Legendary Shirley Temple Dead at 85