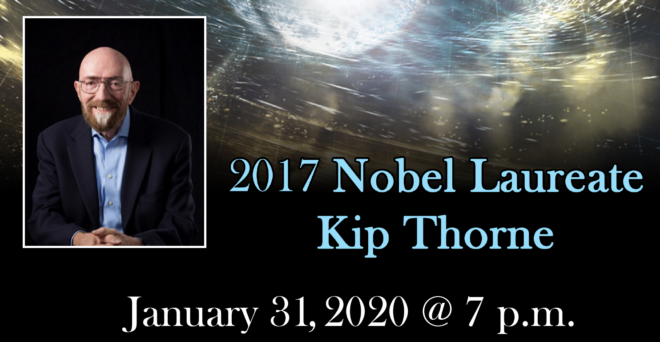 Thorne is one of the world’s leading experts on the astrophysical implications of Albert Einstein’s general theory of relativity. His upcoming lecture, entitled “My Romance with the Warped Side of the Universe,” will cover everything “from black holes and wormholes to time travel and gravitational waves.”

Thorne said that most of his 50-year career has been devoted to exploring the “Warped Side,” which he defines as “objects and phenomena that are made from warped space and time.”

“When I started, the ‘Warped Side’ was a wildly far-out speculation,” Thorne said. “I will describe how my students, colleagues and I transformed a portion of it — black holes and gravitational waves — into firmly established and observed phenomena…”

He will also discuss what and how he has learned about wormholes and time travel and “speculate about future discoveries,” including the birth of the universe.

This is the 5th annual “Taking Your Family to the Victor Valley College Lectures Series,” which was founded to provide local students with opportunities to hear from some of the most illustrious STEM (science, technology, engineering and math) researchers in the world.

Previous events within the series include “Taking Your Family to Pluto” with a lecture from Dr. Mark Showalter, a senior research scientist at the SETI Institute and the discoverer of six moons and three planetary rings, and “Taking Your Family to Interstellar Space” featuring Emer Reynolds, director of the 2017 Emmy Award-winning documentary “The Farthest.”

“These lectures celebrate the thrill of scientific achievement that moves us forward in our understanding of the universe in which we live,” said VVC astronomy instructor Linda Kelly. “Kip Thorne is coming to our college and our region to inspire the next generation of scientists.”

Thorne is the co-founder of the Laser Interferometer Gravitational-wave Observatory (LIGO), which made the first-ever observation of ripples in the fabric of space and time, called gravitational waves, on September 14, 2015. Two years from that date, he and two of his fellows, Rainer Weiss and Barry Barishwere, were awarded the Nobel Prize in Physics.

“Because of his work and receiving the Nobel Prize in Physics, humanity will be able to see back to the beginning of time,” Kelly said. “We applaud our founding sponsors and recognize what an amazing opportunity this will be for students of the entire region as they consider attending college at VVC and then beyond, to make their dreams come true.”

The lecture series is put on with the support of the VVC Foundation, the VVC STEM division, Edison International, The Lewis Center for Educational Research and the VVC Bridge Program.

Kip Thorne’s lecture, “My Romance with the Warped Side of the Universe,” will begin at 7 p.m. on Friday, January 31 at the First Assembly of God, located at 15260 Nisqualli Rd. in Victorville.

The lecture is free and open to the public. Parking is also free for this event. Visitwww.vvc.edu/kipthorne to RSVP online.