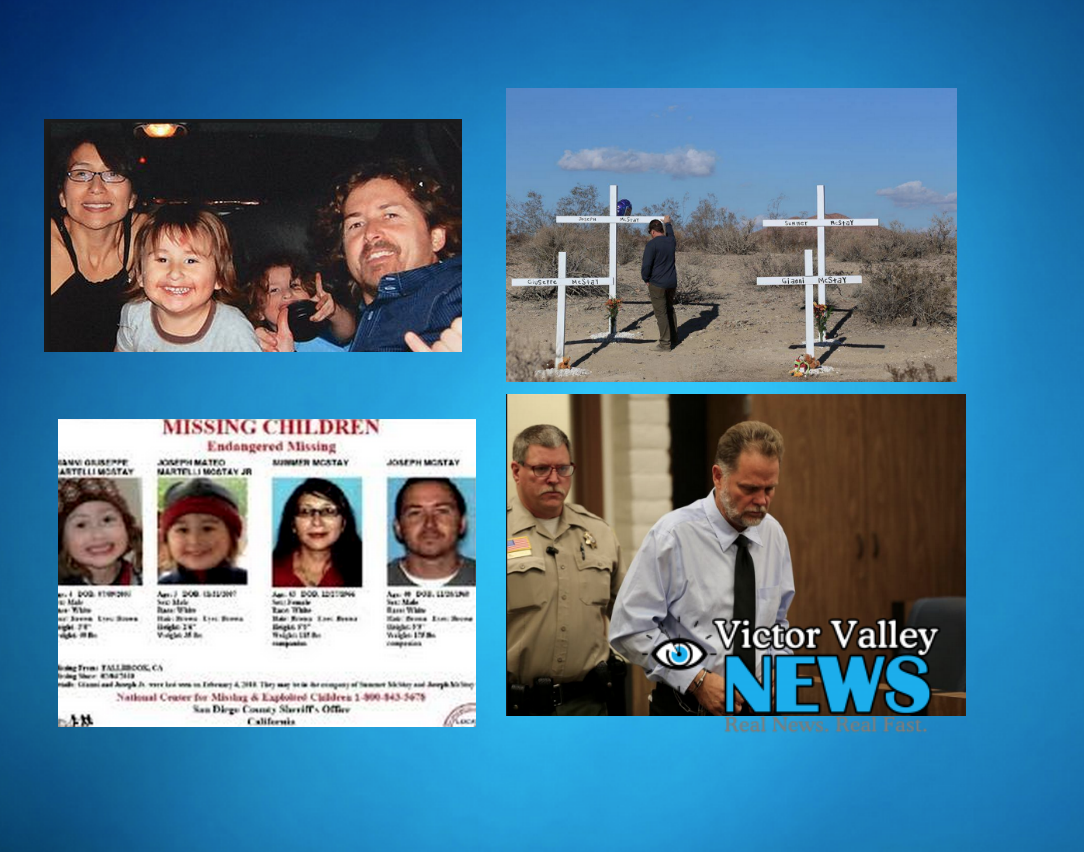 SAN BERNARDINO-(VVNG.com): New information has surfaced from none other than the defense attorney representing Charles “Chase” Merritt for the quadruple murder of his business partner friend and his family.

After expressing his desire to represent himself, “Chase” Merritt recently retained a team of attorneys to represent him during the trial. Over the last few days sis attorney Jimmy Mettias, spoke out by saying that the prosecution will be saying that Merritt used a small approximately 3 pound sledgehammer to kill the family of four.

The sledgehammer according to unconfirmed reports was found in the shallow grave area of the family.

It is also believed cell phone records that determine the location of Merritt during the time of the murders, which according to Mettias none will place Merritt at the alleged scene of the murder, at the Mexican Border where the family SUV was located or near the shallow graves.

Merritt’s attorney believes that the evidence is all circumstantial with a lack of physical evidence to link Merritt to the alleged location of the murder or the shallow grave where the bodies were buried.

The McStay family disappeared from their Fallbrook, California home on February 4, 2010. The family, Joseph 40, Summer 43, Gianni 4 and Joseph 3 were by just about all accounts a normal family of four. Joseph was a business owner who ran a commercial decorative fountain business and Summer was a licensed real estate agent.

During the afternoon of February 4th, 2010 Joseph had gone to a meeting with the welder for his fountain business, Charles Merritt or as he knew him Chase. No one, but him and Chase know what the conversation was concerning, but family of McStay had said that Joseph had told them that Chase’s work had been getting increasingly sloppy causing McStay to start looking for a new welder.

Surveillance from a neighbor of the McStay home, shows that on February 4th, 2010, at 7:45 p.m., the family vehicle left the home, but the vehicle’s occupants could not be seen in the footage.

Family members called them over the next several days, but were unable to get a hold of them. Joseph’s brother, Michael became concerned on February 13th, causing him to climb into an open window to check things out. Upon entering the home, he noticed that there no signs of struggle, but there were popcorn bowls on the sofa. eggs on the counter and the family dogs in the yard unfed as if they had not planned on leaving or had planned on a quick return.

For two days following he continued to try to contact Joseph, leaving him with no clues of where the family might be and even more concerned, concerned enough to make the February 15th missing person’s report. Upon investigation, investigators were able to determine that the last known call going out for Joseph’s phone was at 8:30 p.m.on February 4th, to Chase Merritt. The cell phone pinged on a tower in Fallbrook indicating that at least the phone had still been in the area of the McStay’s home. Merritt failed to pick up the call, stating that he had ignored the call since he was tired and was watching a movie.

After further investigation, they had learned that on February 8th the family’s 1996 Isuzu Trooper was towed from a strip mall on the San Ysidro/Mexican border where it had been parked sometime between 5:30-7:00 p.m.  At 11pm the security guard called for a tow believing that the vehicle had been abandoned. The whereabouts of the vehicle from the 4th to the 8th was still unknown.

The computer was looked at seeking evidence to lead them to the possible whereabouts of the family. During that investigation, they found searches for “learning Spanish” and a search of “What documents do children need for traveling to Mexico?” Grainy images of surveillance footage near the border crossing near where the McStay car was found also showed shadow-like figures that to many resembled the McStay’s.

In April 2013 the San Diego Sheriff’s Department announced that they believed that the departure of the McStay’s into Mexico was voluntary. Family doubted this theory because both Summer and Joseph had safety concerns about travels to Mexico and Summer’s passport, which would be required to return to the United States was expired.

Finger pointing, and theories came from everywhere, but none had solid evidence to support them. Some said there could have been financial problems, but the McStays had over $100,000 in the bank and Joseph’s business had just secured a $9 million commercial fountain deal.

Some even pointed fingers at Summer, whose birth name was Virginia Lisa Aranda, but since the 43-year-old went by five other names at different points in her life, people were quick to make random guesses as to why. Family of the just said that was normal if you knew Summer and her out of the ordinary personality.

From the beginning of the investigation Charles “Chase” Merritt, a friend and business partner who had a past record for burglary and receiving stolen property was a suspect in the murder of the McStay family. Chase denied involvement, but still in a CNN interview said he “knows for a fact” that he was the last person Joseph had seen before going missing. He also mentioned taking a lie detector test and not knowing if he had passed it or not.

In January 2014 Merritt had got together with Joseph McStay’s father to discuss book ideas. In his book he mentioned Summer having “anger issues” and that he had feared she was poisoning him due to Joseph at some points becoming mysteriously ill. The family confirmed these illnesses, but did not believe Summer, who they confirmed was in fact possessive, would ever do anything to hurt Joseph.

Summer’s ex-boyfriend Vick Johansen was also a person of interest. In 2004, when Summer met Joseph, she had been living with Johansen in his Big Bear Lake home. She had got pregnant with Gianni, later in 2004, while she still lived in the home with Johansen. He also had a criminal history of violent threats, felony vandalism, disturbing the peace, interfering with a business and resisting a peace officer.

On November 11th, 2013 four shallow graves were located in an unincorporated area desert near the city of Victorville by a motorcyclist. The motorcyclists reported his findings, causing an investigation, which lead to the November 13th, 2013 identification of the McStay family. Days later the community came together for a memorial with cross placement planned by  Hugo Valdez from Victor Valley News.

On November 7th, 2014, nearly a year after the remains of the McStay family were found, at a press conference at the San Bernardino Sheriff’s Headquarters in San Bernardino it was announced that Charles “Chase” Merritt was arrested on November 5th in Chatsworth for the murder of the McStay family. The cause of death being blunt force trauma, which they believe to have occurred in the family’s Fallbrook home.

At an arraignment continued on November 12, 2014, Merritt put in a not guilty plea for the triple murder of the entire McStay family of four. Merritt has had several hearings, none of which presented evidence indicating the allegedly cause of death or method of murder.

Merritt is currently being held at the West Valley Detention Center on No Bail and if he is found to be guilty, because of Special Circumstances will be eligible for the death penalty.