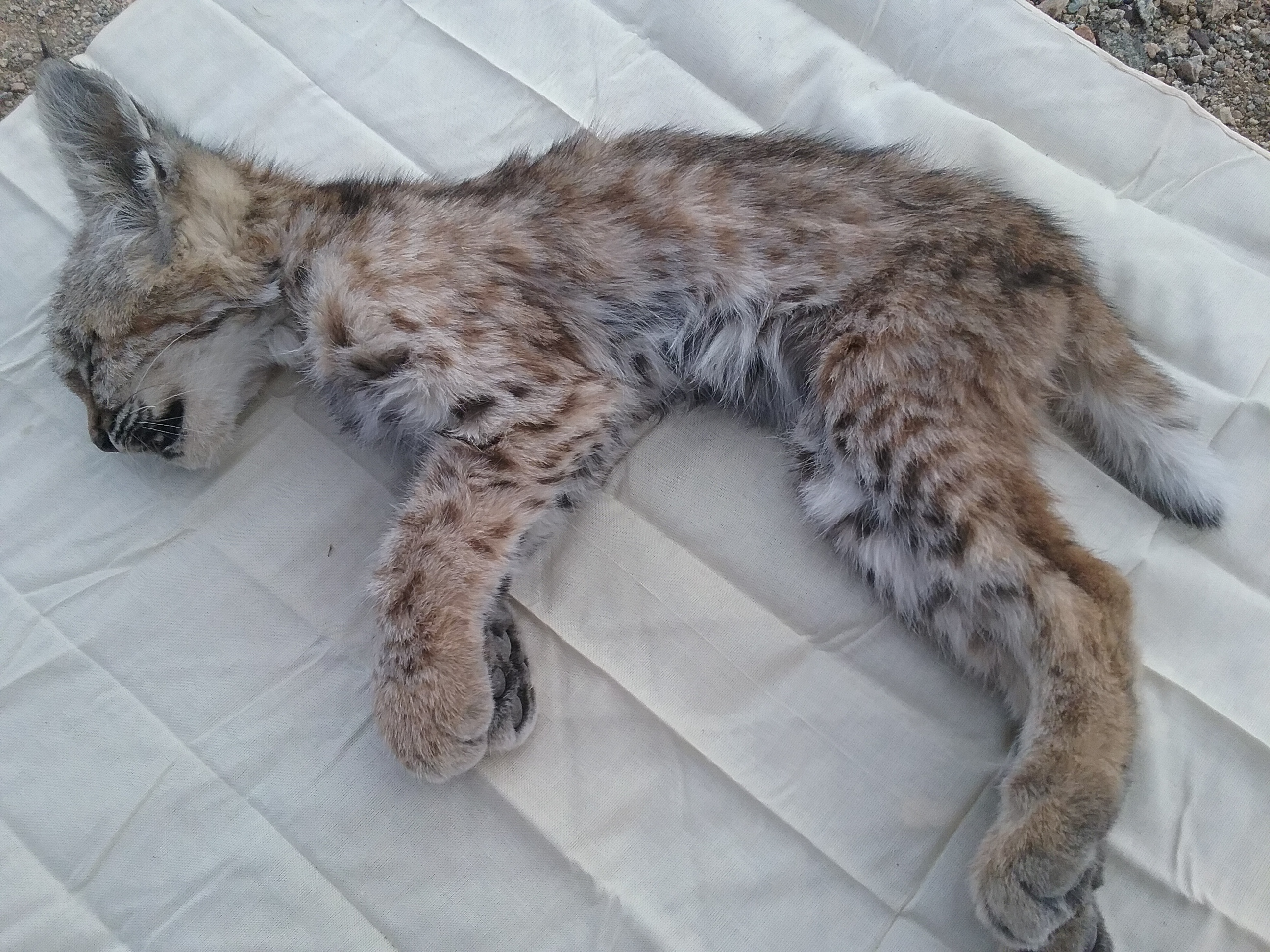 VICTOR VALLEY, Calif: (VVNG.com)- The Blue Cut Fire has certainly left its footprint of destruction in the Victor Valley and beyond.

The fire scorched over 37,000 acres and destroyed over 100 homes. An additional 200 outbuildings and several vehicles were also lost to the fire, according to a previous news release.

At one point over 82,000 people were forced to evacuate from their homes.

Amongst the devastation and evacuations, there has certainly been a major impact and loss of wildlife.

In additions to people, many animals have also been forced to leave the flames. However, those figures will never be truly known.

On August 20th at about 5:00 a.m. Scott was driving in the area of Bear Valley Road and Dennison Road in Apple Valley when he struck a baby bobcat.

Unfortunately there was nothing Scott could do to avoid hitting the bobcat.

“I attempted to help it but it was deceased,” he said.

According to Scott, the baby bobcat seemed to be dehydrated and a bit thin. He believes the bobcat was trying to escape from the burned areas of the Blue Cut Fire.

“People should be made aware of the possibility and to be extra cautious for both wildlife, people, and their pet’s safety.”

“I am so heartbroken over this as I am both a cat and a wildlife lover,” stated Scott.

When animal mortality usually does occur, it is usually from smoke inhalation from very large, and very fast-moving fires such as the one we recently experienced with the Blue Cut Fire.

In the months after a fire, wildlife populations can suffer substantial losses due to habitat alteration and destruction. Since their habitat has been destroyed, wildlife becomes displaced and must spend more time searching for food, water and shelter.

The biggest effect a wildfire has on wildlife habitat is by altering the three things animals need most; food, water, and shelter.

Displaced wildlife may travel to areas not affected by the fire, which puts stress on the displaced wildlife, as well as the wildlife that was already there, due to the increase competition for those necessary resources.

Wildlife in distress: THINGS NOT TO DO

Here are some tips if you are interested in helping the affected wildlife;

– Do not pickup, capture, or attempt to rescue “orphaned” young wildlife. The wildlife you believe to have been abandoned are often simply awaiting the return of their mother after you leave the area. Young animals that are turned into the Game and Fish Department or rehabilitators are often unable to be returned to the wild and may have to be euthanized. It is far better that they are left in the wild unmolested.

– Do not feed displaced wildlife. There are many more negative consequences than positive when it comes to feeding animals, including potential aggression towards humans, disruption of their natural digestive systems, and artificially “holding” them in a specific area when they would normally seek an area with better habitat conditions.