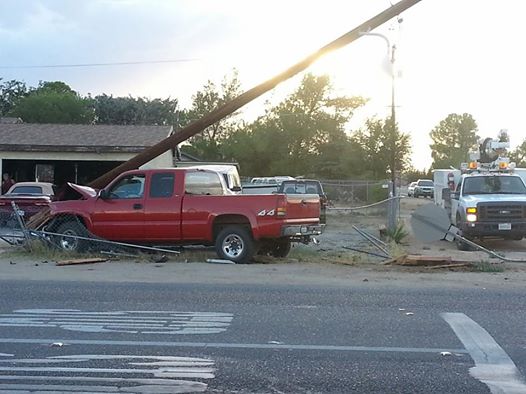 APPLE VALLEY:(VVNG.com)- Several residents lost power after a power pole was knocked over following a three vehicle traffic collision that was reported at approximately 5:40 p.m., on Sunday.

The multi vehicle accident occurred on Kiowa Road and Pahute Road in the city of Apple Valley. The collision involved a red large pick-up truck that struck a power pole eventually knocking it down, a small white truck that crashed into a fence and a white Ford Thunderbird.

According to witnesses, four people were seen running from the scene after the red truck hit the power pole. The suspects are described as two hispanic male adults, two young Hispanic Female Adults with one was possibly pregnant. All four fled the scene. A CHP helicopter along with multiple units assisted in the search for the suspects.

Per scanner traffic, three of the individuals who fled the scene were found shortly after by a nearby Liquor Store. After a thorough search the helicopter left the scene unable to locate the last suspect. Police ran the plates and vin number of the vehicle and authorities responded to the registered owners address. At this time its unknown if the fourth suspect was apprehended.

Traffic was blocked at Sioux Road and Kiowa Road and between Lone Eagle Road and Kiowa Road. Pahute Road was also closed from Kiowa, detour signs were placed in order to conduct an investigation and cleanup of the accident scene. One person injured and was transported to a local hospital by ground ambulance. Southern California Edison was requested to repair the damaged power pole and eventually restoring power to those affected.

At this time the exact cause of the accident is unknown and no further information is currently available. More details will be updated as they are received. 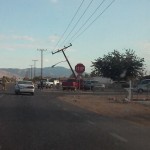 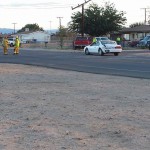 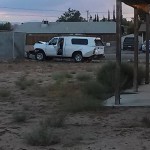 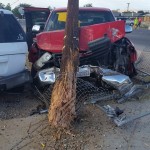 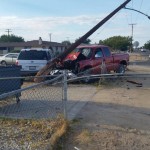 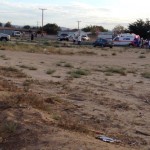