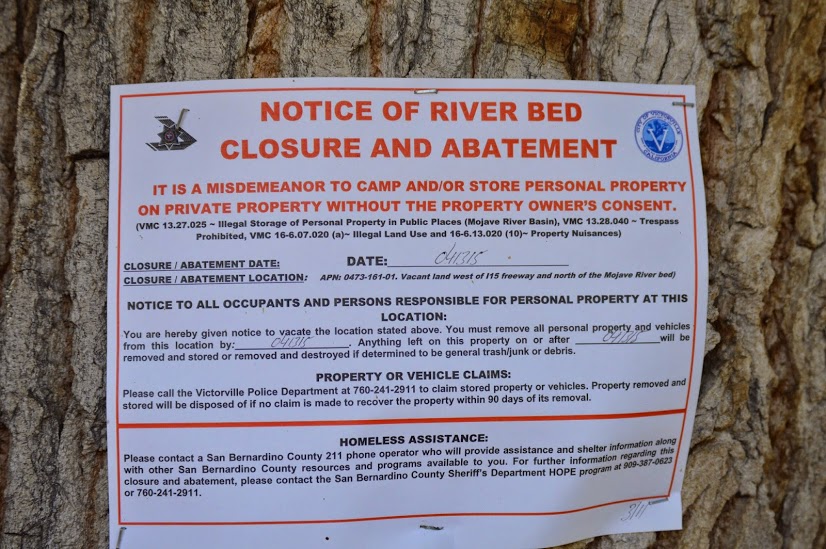 VICTORVILLE-(VVNG.com):  Approximately 25 homeless individuals will be once again displaced from the place they call home on Monday, April 13th. On Sunday afternoon many of those that set up camp in the Riverbed area, just south of Stoddard Wells Road grabbed all of their belongings and arranged to move elsewhere. Some of these individuals claim that they have lived in the area for up to 12 years.

“Some are migrating to the other side, we were blessed to be taken in my Pastor Dave,” said Gloria, one of the residents. “We have been here for a year, we moved here after I had a falling out with my sister a year ago. Now Pastor Dave is taking us and our two dogs in,” she continued.

There are many things that brought the homeless population to the riverbed, some of these things include untreated or poorly treated mental illness, physical illness, drug addiction, prison release with nowhere to go, and the simple loss of the place they once called home. Many have chosen the riverbed over much more comfortable living arrangements like a homeless shelter, or the homes of family or friends due to having pets that are not welcomed in these places. One thing is certain, these people did not choose this life, it is a life that chose them and most feel stuck.

“The H.O.P.E. program is great, they help a lot of people. Some of the help takes time, and we do not have that anymore. We can’t wait for a weeks for a gas card now to be out before tomorrow,” said Gloria.

In December 2014, residents of the riverbed as well as the public were clearly informed of the H.O.P.E. Programs intent to close the riverbed area in March. That deadline came and went with several moved into permanent or at least temporary housing with the assistance of the Homeless Outreach Proactive Enforcement. The H.O.P.E. program deputies gave the people housed there extra time, but the deadline is now. Notices are posted to area trees to remind people who the March 2015 deadline came and went, but the Monday. April 13th deadline will be strictly enforced. A gate was put up on the entrance leading to the dirt road. There are several other ways into the area, but this gate acts more of a “no trespassing” implication.

The program has planned area outreaches in order to provide those that call the riverbed home resources, including housing, medical, veteran, and mental health.

“The HOPE team has been in regular contact with everyone residing in the riverbed and has offered HUD and/or VA (VASH) housing vouchers to everyone living there. Initially when outreach started there were over 70 people in the riverbed. Since the outreach began, the team has housed nine, put many more in contact with service providers, and the population has dropped significantly, although I do it know the exact number offhand,” said Sgt. Robert McCoy.

Although some of these changes are met with the disapproval of churches and organizations, most living in the area have accepted this knowing that they were given ample opportunity and resources to leave the riverbed area.

“As we had hoped, many residents in the closure part of the riverbed have opted to take assistance or make other arrangements.  For instance, we know of one gentleman who elected to go live with his sister in Las Vegas and another who went to live with family in Hesperia since the closure was nearing,” added McCoy.

The moves seem heart-wrenching or wrong for those not informed of the unprecedented approach that was taken to provide the bridge from homelessness to permanent housing. The one year of proactive outreach from the H.O.P.E. team providing numerous resources including housing vouchers or other assistance that some chose not to accept. “This can be a scary place, especially at night. People have been raped, murdered and assaulted. A body was found over there recently,” said Gloria pointing in a north-west direction of her camp.

The H.O.P.E. team has used a tough love approach to the situation. According to McCoy, over 4500 calls have been made from the riverbed area in the past year. These calls include calls reporting rape, murder, attempted murder and assault with a deadly weapon which make cleaning up, although a sensitive subject, a necessity for the Victorville Police. The concern is not only one of safety, but also a health and sanitation concern. They worked hard along with mental health clinicians to identify, contact and share resources available with each and every resident in the riverbed area. “H.O.P.E. team outreach will continue in the interest of linking homeless with services with the primary focus being transitioning them from homelessness,” added McCoy.

The gates are set at the entrance, the residents seemed for the most part to be leaving or at least migrating. “The Monday closure will be low-key and we hope not to have to make any arrests.  The riverbed has been posted no trespassing, as it is private property, and our goal after Monday will be to ensure that no one returns or sets up camp in the closed off area.” For several the closure has transitioned them into permanent housing or pushed them into reunification with estranged family members. “We even get to take our two dogs,” said Gloria, in her pink sequin top. “This is my celebration outfit, we have made a lot of friends, a lot of churches and organizations have helped us and we appreciate that.”

Those choosing not to comply, according to McCoy, will be subject to citation and/or arrest. Vehicles left there will be subject to tow removal. “After the closure, inroads will be blocked to prevent vehicles from returning, and deputies will routinely check and enforce no trespassing laws,” added McCoy.