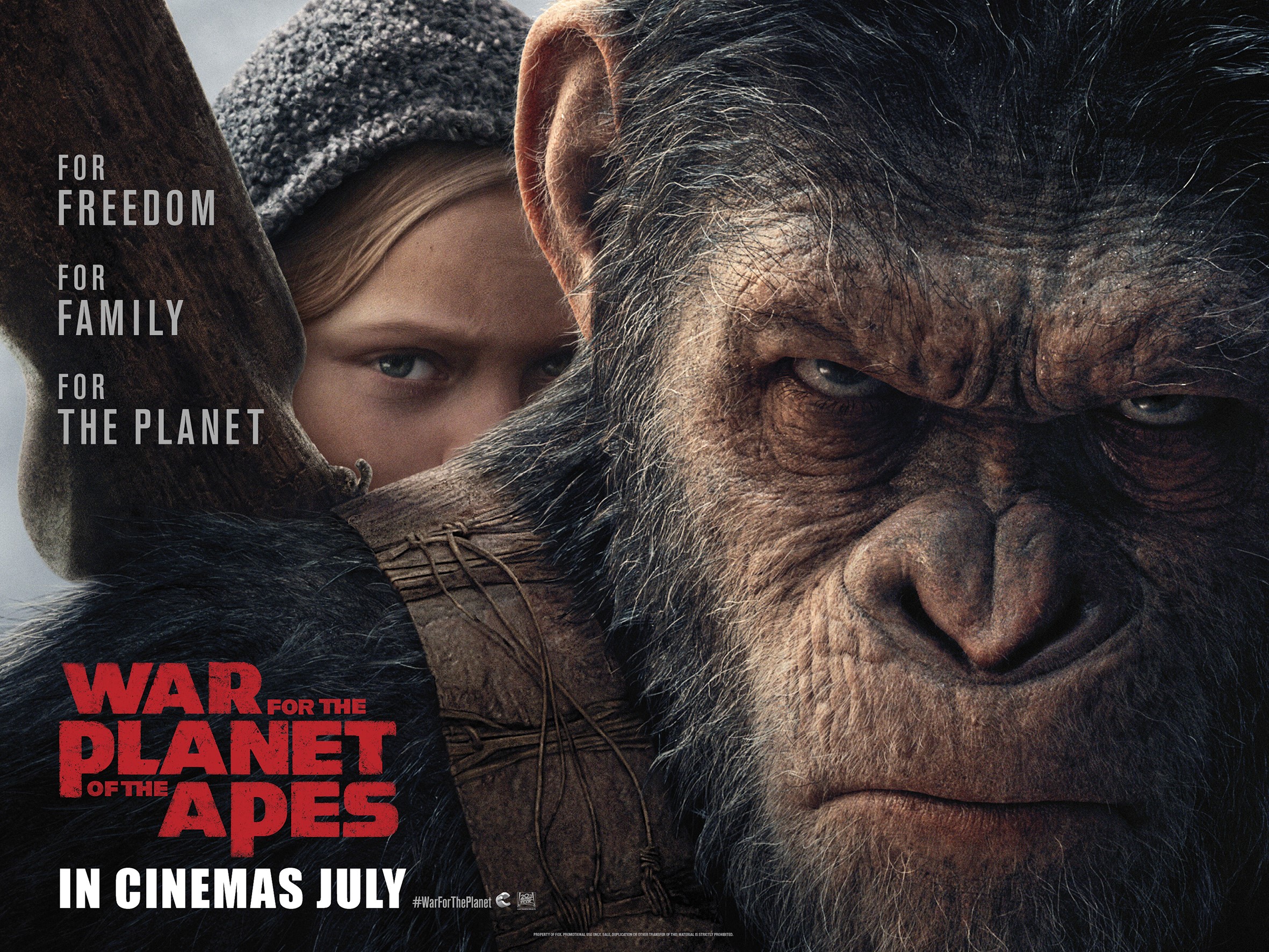 VVNG.com- With the word, WAR, being in the title of this flick, it is safe to assume that you are expecting a full on battle between the lovable apes and the damn dirty humans, right? Well I am not going to spoil anything for you, but I WILL warn you that the actual war in this film is not the type of combat that you would typically picture when you are thinking about war. There are plenty of ape vs ape and human vs human conflicts instead of a big epic clash between the primates and the homo-sapiens. But before you get upset and think that you are not going to enjoy this flick, just because you won’t get what you were promised in the trailer, just know that you will instead get an excellent film with lots of heart, plenty of action and extremely powerful moments that actually make the movie way better than the one I thought I was getting.

Most of the flick is focused on the beloved leader of the apes, Caesar (played perfectly by Andy Serkis), and how he just wants to live in peace with his family and his fellow simians. The humans are, of course, ticked off because they are now on the brink of extinction and they are not about to leave Caesar alone to reproduce and take over the planet. So, once again, they force Caesar to do whatever he has to, to ensure the survival of his kind.

The relationships between the apes are totally believable and heartfelt. Caesar and his family are (mostly) very loyal, very smart and very resourceful. The humans (even though they might have good reasons) are such bastards in the movie that you can’t help but cheer for the apes throughout this very powerful film.

I give War for the Planet of the Apes, the “Checky™ Seal of Approval!” Kudos to the special effects department for making the apes (at least the main ones) look amazingly realistic. This film is so good that I didn’t even mind the filmmakers using a Bait And Switch technique in the marketing to get my butt in the theater. I feel like Struggle for the Planet of the Apes or Escape from the Prison of the Apes would have been a more accurate description of this movie though (but I agree that it wouldn’t sound as impactful).

The only thing I didn’t really love was the ending but I guess it’s always sad to watch such a superb trilogy come to an end.

I suggest you quit monkeying around and check this film in theaters. You are sure to have a great time whether you are #teamapes or #teamhumans.

So, what did you think of War for the Planet of the Apes? Do you agree or disagree with me? Which flick are you checking out this week? Let me know in the comments below. Have a great day at the movies and don’t forget to save me some popcorn.

Official Synopsis: Caesar (Andy Serkis) and his apes are forced into a deadly conflict with an army of humans led by a ruthless colonel (Woody Harrelson). After the apes suffer unimaginable losses, Caesar wrestles with his darker instincts and begins his own mythic quest to avenge his kind. As the journey finally brings them face to face, Caesar and the colonel are pitted against each other in an epic battle that will determine the fate of both of their species and the future of the planet.