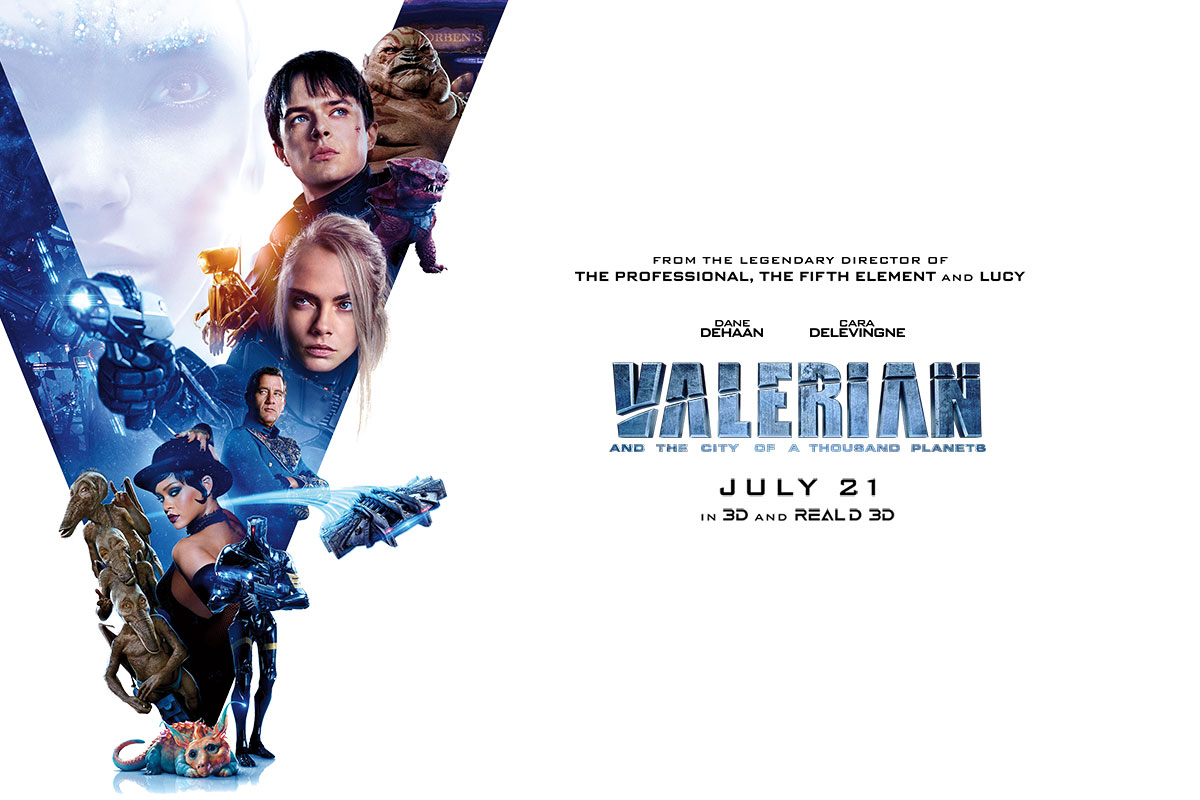 VVNG.com- Have you ever wanted to travel to the far reaches of space but didn’t want to pay for expensive spaceship tickets? Well you are in luck! This movie transports you light-years into a fantastical and imaginative universe that is colorful and vibrant and full of aliens, monsters and all sorts of zany and silly characters. And the best part is that you only have to pay for a movie ticket (although I do suggest you upgrade to 3D for maximum enjoyment). So give your eyes something beautiful to look at by taking them to watch this movie that, although has some imperfections, is ultimately a wonderful adventure through time and space.

The main attraction to this flick are definitely the top-notch visual effects that pop out at you in all of their magnificent glory. I admire the director (Luc Besson)  and everyone else who made the movie look so gorgeous. It is nice to see that there are so many advances in technology nowadays that make a film like this possible. The only problem with having the power to create anything they want is that it is hard to resist the temptation to create ANYTHING they want.

Some of the the aliens they created looked too cartoony and took me right out of the movie. There are also some sequences (I’m looking at you Rihanna) that were incredibly silly and… I don’t want to say stupid but… REALLY stupid. Other than that (and the fact that the two main actors look like they need a granola bar), I REALLY enjoyed everything this movie did right.

I give Valerian and the City of a Thousand Planets, the “Checky™ Seal of Approval!” This flick is such a visually stunning ride that takes you to places your imagination couldn’t even begin to imagine. The story is interesting (although not surprising), the pace makes the 2 hour runtime feel a lot shorter, and there are tons of inventive creatures and environments that make the entire flick feel incredibly creative. My only complaints about the film are the aforementioned goofiness and the fact that Cara Delevingne seemed like she could only express one emotion throughout the movie. She did get better towards the end so maybe it was just lack of direction, but that is not nearly enough to overshadow the cornucopia of inventiveness.

So If you have always wondered what is beyond the observable universe then… you are going to have to keep wondering, because this is a make-believe movie. HOWEVER, if you check this flick out in theaters (specially in 3D), you will at least feed your imagination with a thousand planets worth of possibilities as to what could possibly be going on out there. And that to me, sounds like a galactic good time.

So, what did you think of Valerian and the City of a Thousand Planets? Do you agree or disagree with me? Which flick are you checking out this week? Let me know in the comments below. Have a great day at the movies and don’t forget to save me some popcorn.

Official Synopsis: In the 28th century, special operatives Valerian (Dane DeHaan) and Laureline work together to maintain order throughout the human territories. Under assignment from the minister of defense, the duo embarks on a mission to Alpha, an ever-expanding metropolis where diverse species gather to share knowledge and culture. When a dark force threatens the peaceful city, Valerian and Laureline must race against time to identify the menace that also jeopardizes the future of the universe.