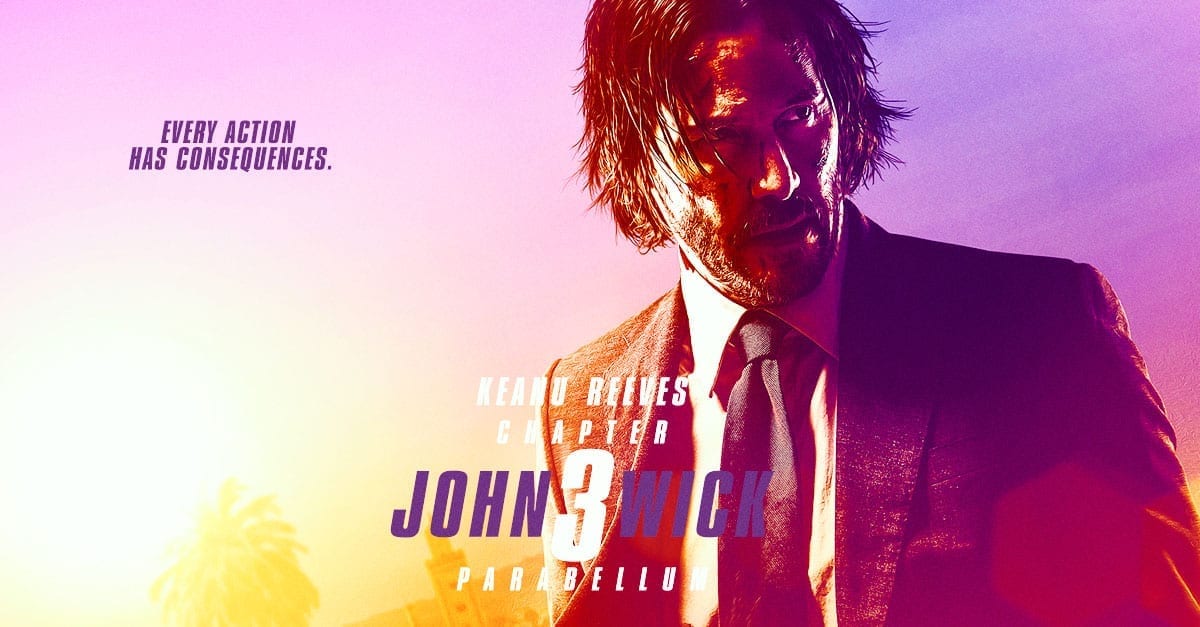 VVNG- There are not enough idioms, clichés, similes or metaphors to accurately describe how John Wick, an Angel of Death, is an unstoppable killing machine and a force of nature that is as deadly as a plague and not to be reckoned with. He delivers every stab, kick, shot and/or punch with incredible accuracy and brutal force, as he takes out SO MANY bad guys, in this masterfully choreographed and action-packed flick. If you want action, you will not be disappointed, you will receive it in a spectacular and highly impressive manner.

I googled Parabellum and it means: Prepare for war. This is a very accurate title for this chapter since it’s basically every assassin in the world against Mr. Wick in an all-out war. Since John is excommunicado (or banished), he has to fight countless baddies who are dumb enough to try to collect the 14 million dollar bounty on his head. I mean, this is the third movie already, everyone should know that if you mess with John (or his pets), then you better have your affairs in order because you will soon be meeting your maker at the hands of this violent badass.

I give John Wick: Chapter 3, the “Checky™ Seal of Approval!” Aside from some slow scenes (which you can use to catch your breath), and the fact that this movie doesn’t have an ending, everything else in it is good and worthy of being a part of this superb action series. I don’t condone real violence, AT ALL, but this is movie-violence, and Mr. Wick makes it look SO good. I can’t praise Keanu Reeves enough for being so believable as an assassin who can turn just about anything into a weapon. We know what he can do with a pencil, now find out what he can do with a belt, a book, and a freaking horse! Kudos to Halle Berry and her character’s dogs as well. They all do a terrific job terminating anyone who gets in their way.

What did you think of John Wick 3? Do you agree or disagree with me? Which flick are you checking out this week? Let me know in the comments below. Have a great day at the movies and don’t forget to save me some popcorn.

Official Synopsis: After gunning down a member of the High Table — the shadowy international assassin’s guild — legendary hit man John Wick finds himself stripped of the organization’s protective services. Now stuck with a $14 million bounty on his head, Wick must fight his way through the streets of New York as he becomes the target of the world’s most ruthless killers.