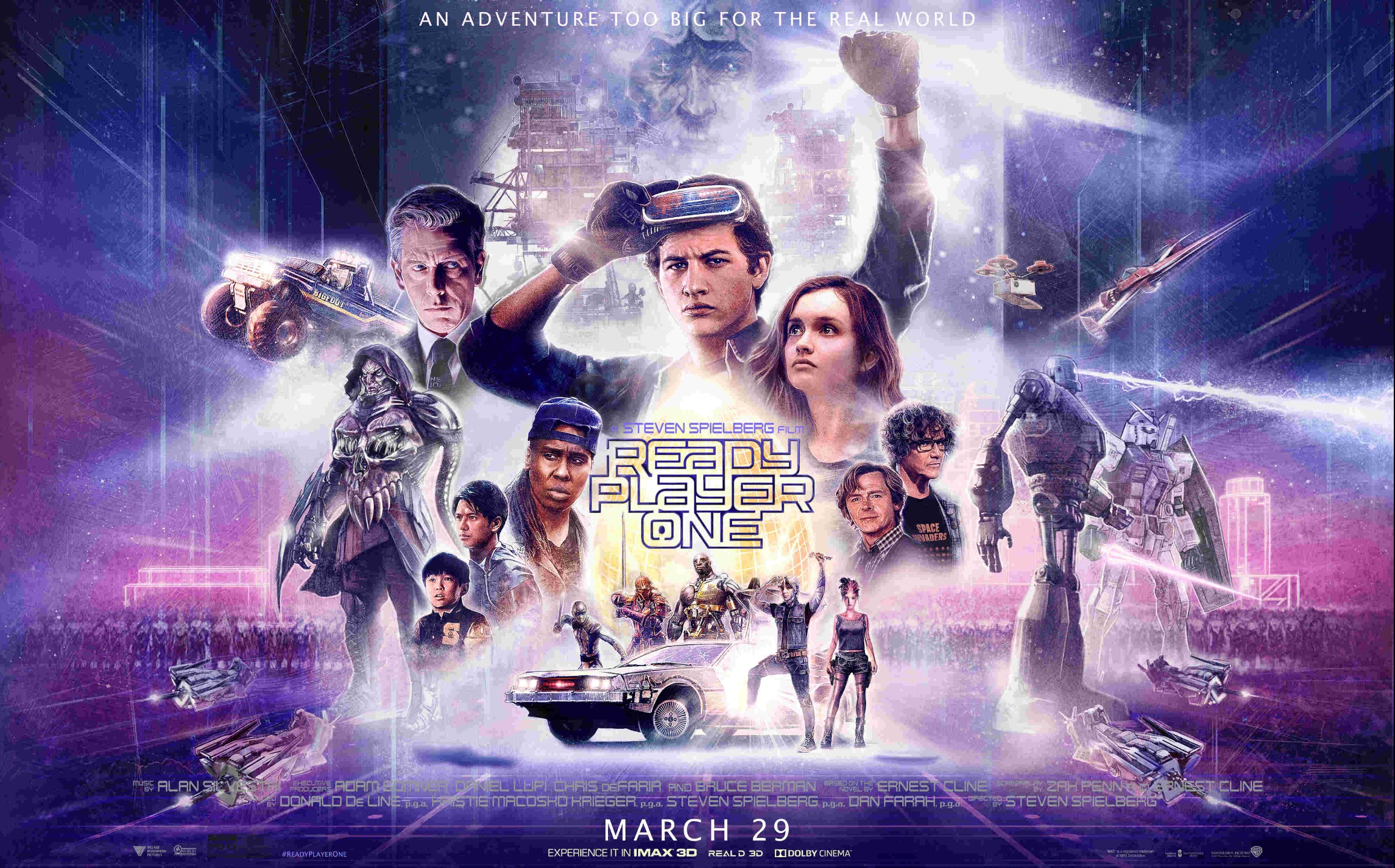 VVNG-I think I have a fairly vivid imagination. I mean, among other things, I have meticulously thought about what I am going to do when the zombie apocalypse is upon us. I get super sad whenever I think of a loved one dying (to the point of getting teary eyed). And before I even hand the money to the cashier, to buy a lottery ticket or scratcher, I have already daydreamed about what I am going to buy, where I am going to go, and how I am going to lose everything after I win. However, I don’t think I can ever reach the level of intelligence, skill, creativity, and (of course) imagination to create a film as visually mind-blowing as this one.

This movie is packed with tons and tons… and tons of different characters, vehicles, locations and music from movies, tv shows, video games, and any other form of media and pop-culture, you can think of.

All of these references are inside of a vast virtual-reality world called the OASIS which was created by an eccentric genius named James Halliday (Mark Rylance). Since the world is kinda crappy in the future of 2045, everyone prefers spending most of their time inside the OASIS because they can be anything or anyone they want in there. When Mr. Halliday dies, he leaves behind a 3 challenge easter egg-hunt that will give the first person who finishes all 3 challenges, complete control of the OASIS. The whole world is participating in the competition, but Parzival (Tye Sheridan), Art3mis (Olivia Cooke), and 3 other players, have the best shot to win and prevent an evil corporation from taking over and monetizing the immersive world of pure imagination.

I give Ready Player One, the “Checky™ Seal of Approval!” Steven Spielberg wonderfully brings Earnest Cline’s geek-heavy book to life as he masterfully juggles incredible visual effects, explosive action, laugh-out-loud comedy and an interesting and immersive story. Kuddos to everyone involved in this creative work of art.

All of the challenges are great. The first one is a race featuring countless iconic cars (including a Batmobile) where a bunch of vehicles get demolished by wrecking balls, stomped on by King Kong or crushed by a freaking T-Rex. This sequence is worth the price of admission all by itself, and left me completely speechless. According to my wife, I was just laughing and smiling like a total idiot (which I thought was a bit hurtful but, probably very accurate).

I do have to say that even though I loved the movie, it did have a few glitches, like a lack of character development and insufficient buildup to key moments. Also, you might be bummed if you read the book because they change A LOT (like 80%) of the book’s story. Nevertheless, it is a great film on its own and you will enjoy it much more if you have this in mind.

Go watch this flick in theaters (in 3D if you want another dimensional layer of awesomeness), and just be aware that this movie is  incredibly entertaining and impressively inventive. Make sure you are READY for it.

So, what did you think of Ready Player One? Do you agree or disagree with me? Which flick are you checking out this week? Let me know in the comments below. Have a great day at the movies and don’t forget to save me some popcorn.

Official Synopsis: From filmmaker Steven Spielberg comes the science fiction action adventure “Ready Player One,” based on Ernest Cline’s bestseller of the same name, which has become a worldwide phenomenon. The film is set in 2045, with the world on the brink of chaos and collapse. But the people have found salvation in the OASIS, an expansive virtual reality universe created by the brilliant and eccentric James Halliday (Mark Rylance). When Halliday dies, he leaves his immense fortune to the first person to find a digital Easter egg he has hidden somewhere in the OASIS, sparking a contest that grips the entire world. When an unlikely young hero named Wade Watts (Tye Sheridan) decides to join the contest, he is hurled into a breakneck, reality-bending treasure hunt through a fantastical universe of mystery, discovery and danger.

MOVIE REVIEW: A Quiet Place is an Emotionally Frightening Thriller