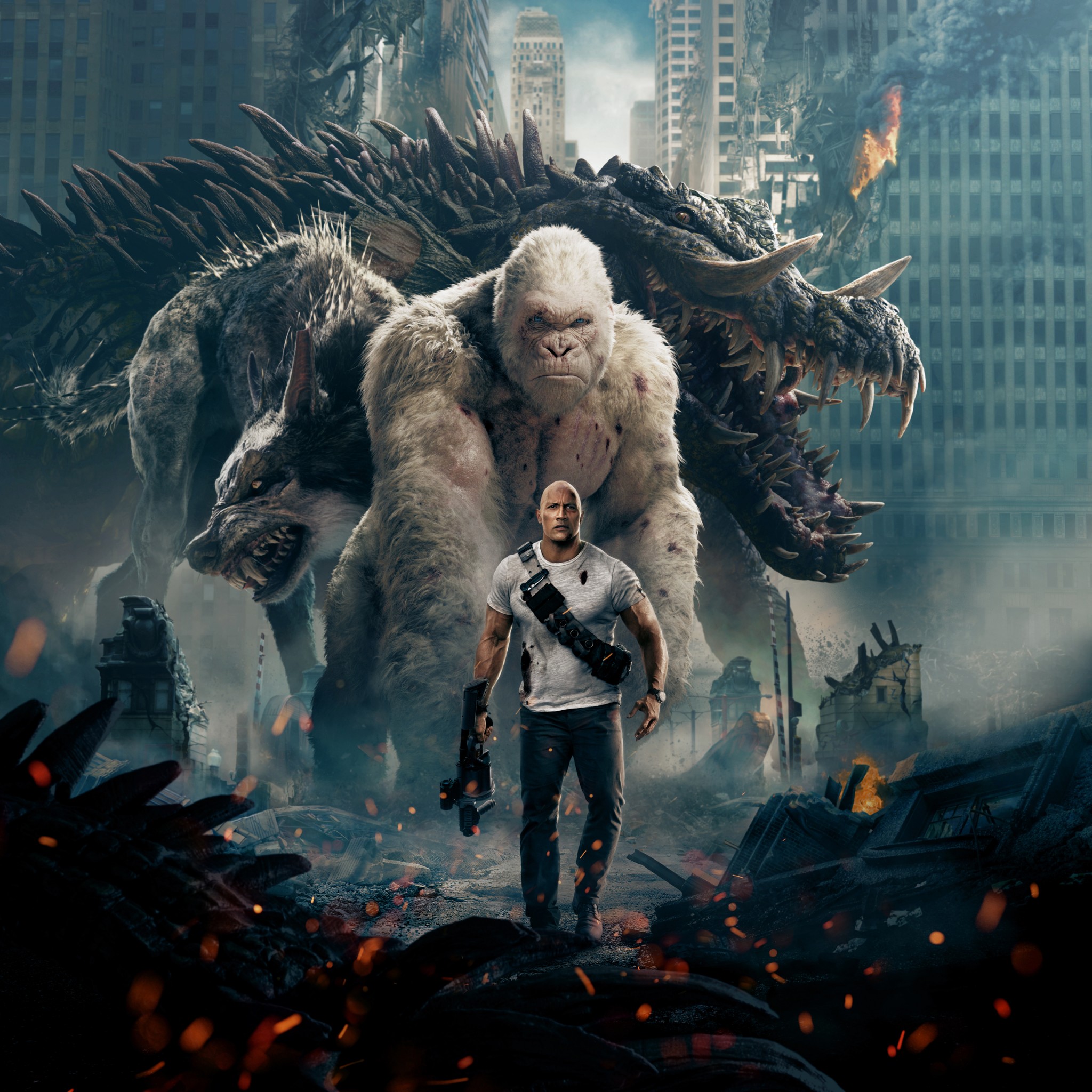 VVNG- Are you ready to feel guilty for having so much fun watching 3 monsters cause an enormous amount of physical, emotional and (not to mention) financial destruction? Don’t feel bad if you answered yes. After all, this is just a movie. A very fun and funny movie you get to enjoy while scarfing down popcorn and setting your brain to vibrate.

The Rock may be in almost every blockbuster coming out this year, but he always gives 110% of himself to his performances. This time is no exception, AND he has 3 cuddly creatures to play with so, you know, win-win.

Brad (Dwayne “The Rock” Johnson) is a primatologist who has a really sweet and believable relationship with a 400 pound albino gorilla named George. A very smart and friendly ape who gets sprayed with a gene altering formula that turns him into an aggressive giant monster. 2 other animals also get sprayed with the same stuff, and all 3 of them go wild and destroy everything in their path. Now it’s up to Brad to stop the rampage and save his lovable primate friend.

I give Rampage, the “Checky™ Sticker of Tolerance!” Ultimately, this all boils down to 3 giant animals obliterating a city and then smashing each other (by smashing I meant fighting, don’t be gross), and who doesn’t like that? This flick has really good action, good comedy and great special effects. The Rock is always good, and even though it seems like his characters are always self-aware that they are in a movie, they are never dull or uninteresting. I will say that some of the violence is a bit graphic, the humor is a bit too crass, and some scenes MIGHT be a bit too scary for the little ones. Other than that, it is a very enjoyable movie.

Don’t walk, rampage (ha) your way to the theater so you can watch these gigantic creatures on the big screen, smashing, brawling and destroying everything that gets in their way. Just keep reminding yourself that this is just a flick. It will help you ignore the fact that tons of people are murdered and billions of taxpayer dollars will have to be spent repairing the damage caused by the colossal beasts.

What did you think of Rampage? Do you agree or disagree with me? Which flick are you checking out this week? Let me know in the comments below. Have a great day at the movies and don’t forget to save me some popcorn.

Official Synopsis: Global icon Dwayne Johnson headlines the action adventure “Rampage,” directed by Brad Peyton. Johnson stars as primatologist Davis Okoye, a man who keeps people at a distance but shares an unshakable bond with George, the extraordinarily intelligent, incredibly rare albino silverback gorilla who has been in his care since he rescued the young orphan from poachers. But a rogue genetic experiment gone awry mutates this gentle ape into a raging creature of enormous size. To make matters worse, it’s soon discovered there are other similarly altered animals. As these newly created alpha predators tear across North America, destroying everything in their path, Okoye teams with discredited geneticist Kate Caldwell (Naomie Harris) to secure an antidote, fighting his way through an ever-changing battlefield, not only to halt a global catastrophe but to save the fearsome creature that was once his friend.

MOVIE REVIEW: A Quiet Place is an Emotionally Frightening Thriller