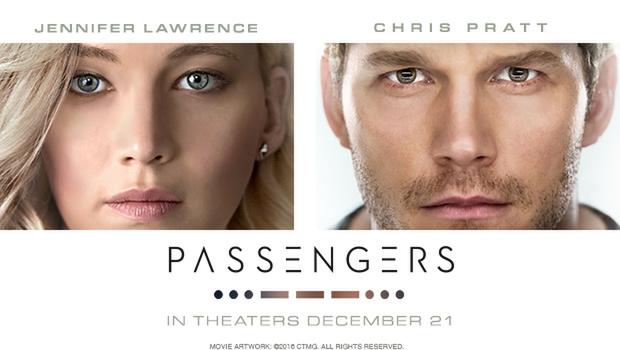 (VVNG.com)- If you are planning on watching this, you will surely enjoy all of the beauty that is showcased during this fun and, sometimes, unoriginal flick. You will get to gaze upon a gorgeous human who is charming and funny and whose presence on screen attracts your attention instantly. And if Chris Pratt (Guardians of the Galaxy) isn’t enough, you also get to see Jennifer Lawrence (The Hunger Games), be as stunning and adorable as ever. You will witness a sleek, futuristic and clean looking space ship that looks like it was designed by Apple and Samsung (insert Apple Maps or exploding Note 7 joke here). You will also observe lots of great scenery like the vastness of space and all of its magnificent glory, Chris and Jen’s butts and then some more space. Even though the movie “borrows” A LOT from other movies, it is still very enjoyable and keeps you amused for the duration of the film… Oh, and did I mention Chris and J-Law show their tushies?

I know I’m focusing too much on Jennifer and Chris’ appearances, (my wife is actually giving me a  dirty look because of it) but how can you put Katniss and Star Lord in the same flick and NOT notice how much they look like perfect specimens. These are two of the most beautiful people on earth (subjectively speaking of course) and the filmmakers make sure to bank on that as much as possible. They constantly show them off wearing bikinis and tight dresses, being shirtless, showering, and making whoopee.

Besides the obvious display of the actors’ good looks, there is also plenty of humor and charm that keep this flick entertaining. Chris Pratt is basically by himself for more than half of the movie but he does a great job being funny and charismatic and then when Jennifer Lawrence joins him, they are adorable and have great chemistry together. The movie’s trailer promised a revelation at the end or made it seem like it was going to have a few surprises. I have to warn you that what you see in the trailer is what you get. There is not an “M. Night Shyamalan” twist at the end or anything, just a few “oh poop!” moments. The flick also doesn’t have the most original premise; it’s kind of a mix of Cast Away, The Martian, Wall-E, Armageddon, 2012, and a bit of The War of the Roses. And Jennifer Lawrence got on my nerves a bit, but she had her reasons, and I love her too much to stay mad at her for long.

However, despite its flaws and lack of uniqueness, I give Passengers, the “Checky™ Seal of Approval!” because this excellent date movie is fun, it looks good, it is well made, the visual effects are flawless, the sci-fi aspect of the story is done in a realistic and smart way, and the actors all do a great job . The flick is slow paced but interesting and funny without it being boring. I don’t think it is a movie you HAVE to see in theaters or more than once, but it is enjoyable enough to justify, at least, a matinee ticket price. Towards the end, the flick does bombard you with clichés, but by then I was already hooked and invested in the characters that I didn’t mind and actually enjoyed it. Besides, I’m kind of a sucker when it comes to mushy moments, no matter how unoriginal they are. So take a ride to your local theater or just wait for Redbox so you can enjoy this sci-fi-rom-com and see how many copied ideas you can notice.

So, what did you think of Passengers? Do you agree or disagree with me? Which flick are you checking out this week? What is your favorite Sci-Fi movie of all time? Let me know in the comments below. Have a great day at the movies and don’t forget to save me some popcorn.

Jennifer Lawrence and Chris Pratt star in an exciting action-thriller about two passengers who are on a 120-year journey to another planet when their hibernation pods wake them 90 years too early. Jim and Aurora are forced to unravel the mystery behind the malfunction as the ship teeters on the brink of collapse, with the lives of thousands of passengers in jeopardy.