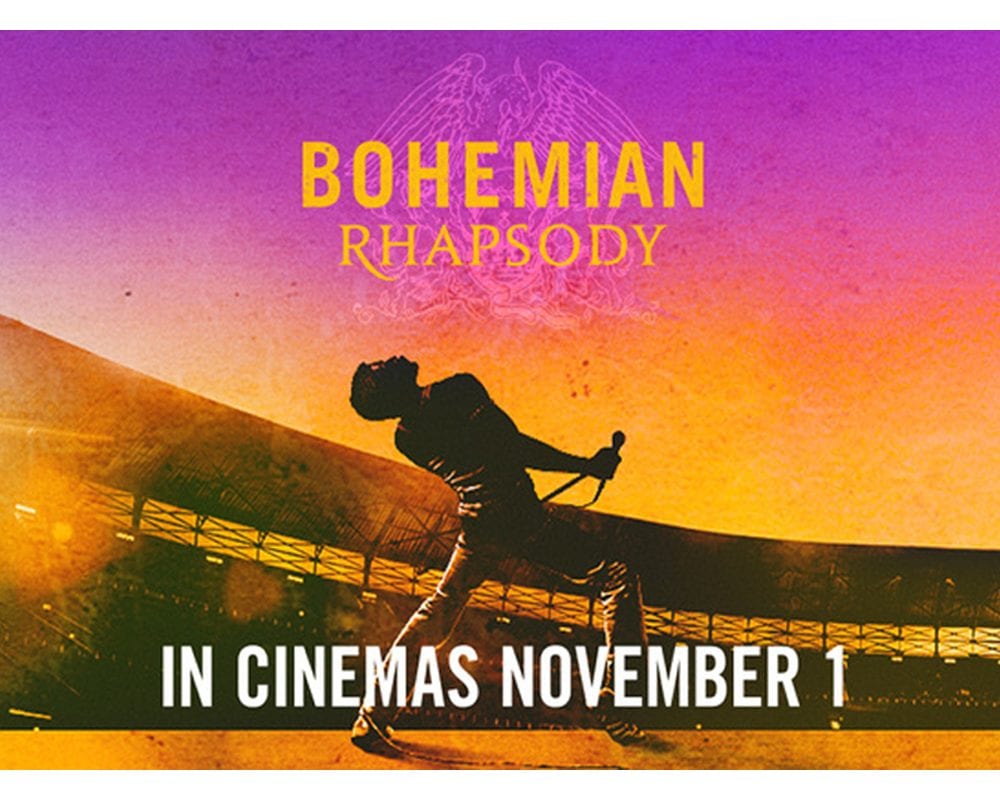 VVNG- To say that I got goosebumps while watching this film would be a gross understatement. My whole body was pulsating to the beautiful sounds emanating from the screen. Sorry to the Civic Plaza theater owners if I left grip marks on their seat, but I felt really anxious, and it took all of my self-control not to get up and dance, every time a song would play. Listen, I never met Queen in person so I don’t know how much of this story is true, for all I know, most of it was Hollywoodized for entertainment purposes, or it could all be 100% true (I doubt it). All I know for sure is that I loved experiencing this enthralling story full of laughs, heartbreak, sadness, incredible performances, and glorious music, and I suggest you go watch this so you can feel the same way. Just be warned that it will, oh it most definitely WILL… Rock You!

This musical masterpiece gives you a look at how the legendary band, Queen, became one of the best bands of all time, with Rami Malek giving a terrific performance as the lead singer, Freddie Mercury. It wasn’t all lollipops and rainbows for the rockers, though. The film also shows how sad and lonely Mr. Mercury was, despite all of the fame and fortune. Don’t worry though, there are more cheerful and uplifting parts than gloomy ones in this grand celebration of music that will have you listening to Queen, and nothing but Queen for the foreseeable future, immediately after watching this flick.

I give Bohemian Rhapsody, the “Checky™ Seal of Approval!” This flick has one of the most epic and electrifying finales in cinematic history. It justifies the price of admission and it makes you feel as if you are in an actual concert. I was angry at everyone in the theater (myself included) for not starting to clap or sing or dance along to the spectacular songs playing on the screen. I mean, is it too much to ask for some foot-stomping at least?… Anyways, as you might have been able to tell already, I loved almost everything about this flick, and it offers much more than just the fantastic music. This movie is also very entertaining because of its funny moments, charming characters, and fantastic performances, especially from Rami Malek. He is so great, he deserves a paragraph all to himself. (ENTER)

If Rami Malek doesn’t at least get an Oscar nomination for his perform… nay… his complete transformation into Freddie Mercury, I will be outraged. I will be the first person on the internet that will be angry about something (ha). I am not so worried about that though. He will undoubtedly receive the recognition he deserves for portraying Freddie Mercury, an amazingly talented man with a personality that nothing or no one could contain, in a totally believable way.  The way Rami is able to effortlessly (and impressively) dance, sing and act as the groundbreaking singer, will make your jaw drop.

If you like Queen or biopics or superb acting or excellent music or just great movies in general, then you need to experience this musical tour de force, in the largest screen with the loudest speakers, as soon as possible. You will have just as much fun as you would at a concert, listening to the marvelous songs that are featured in this movie. Just make sure you bring a big bag of restraint with you because you will need every bit of it to not stand up and dance in the aisles as you shout at the top of your lungs: “LONG LIVE QUEEN!”

What did you think of Bohemian Rhapsody? Do you agree or disagree with me? Which flick are you checking out this week? Let me know in the comments below. Have a great day at the movies and don’t forget to save me some popcorn.

Official Synopsis: Bohemian Rhapsody is a foot-stomping celebration of Queen, their music and their extraordinary lead singer Freddie Mercury. Freddie defied stereotypes and shattered convention to become one of the most beloved entertainers on the planet. The film traces the meteoric rise of the band through their iconic songs and revolutionary sound. They reach unparalleled success, but in an unexpected turn Freddie, surrounded by darker influences, shuns Queen in pursuit of his solo career. Having suffered greatly without the collaboration of Queen, Freddie manages to reunite with his bandmates just in time for Live Aid. While bravely facing a recent AIDS diagnosis, Freddie leads the band in one of the greatest performances in the history of rock music. Queen cements a legacy that continues to inspire outsiders, dreamers and music lovers to this day.