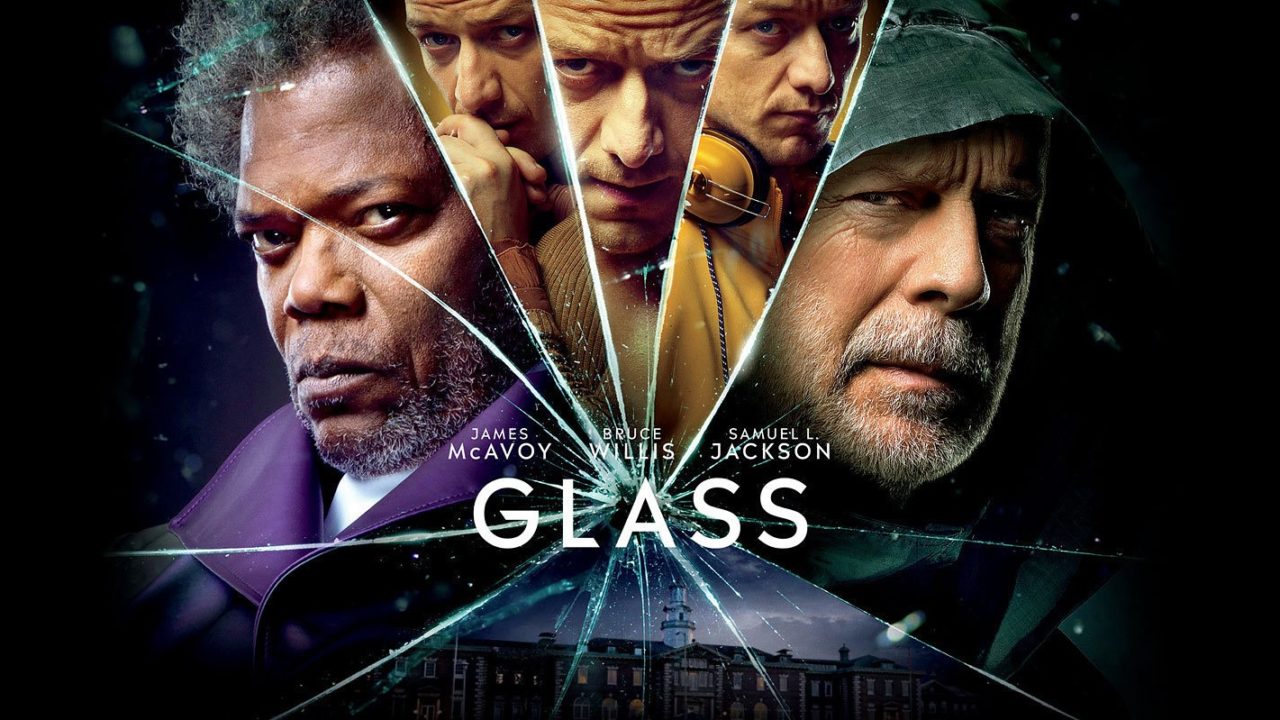 VVNG- If James McAvoy didn’t get 24 paychecks for this flick, he seriously needs to get another agent because he does a marvelous job acting his heart(s) out as a character with 24 distinct personalities and deserves to get paid for every single personality. Compared to his performance, Bruce Willis seems like a sack of potatoes who left his A-Game in a closet somewhere, along with his cup of coffee, because he seems like he has no energy or desire to be in this movie. Even though I could watch James’ fantastic acting for more than two hours, I was disappointed that this film wasn’t the grand finale I was expecting. It was, however, full of wonderful surprises and intriguing premises that you can enjoy as long as you accept the fact that you will not be getting a typical plot.

This film is a sequel to Unbreakable and Split. In Unbreakable, we see how David Dunn (Bruce Willis) finds out that he has superhuman strength and the ability to see into people’s minds by simply touching them. He discovers this with the “help” of Elijah Price (Samuel L. Jackson), a genius with a fascination for comic books, and a genetic disorder that causes him to have extremely brittle bones. In Split, Kevin (James McAvoy) suffers from Dissociative Identity Disorder (DID) and has 23 personalities, with a 24th personality called the Beast threatening to emerge as a violent savior of the “unpure”. In this movie, David, Elijah, and Kevin are all captured and placed in the same psychiatric facility, where things are undoubtedly going to get shaken up between these three cool cats.

I give Glass, the “Checky™ Sticker of Tolerance!” This flick does not disappoint when it comes to the clever twists we have come to expect from director M. Night Shyamalan. However, the epic showdown I was expecting this movie to have between Bruce Willis and James McAvoy’s characters was kind of a letdown. I mean, we already had Unbreakable and Split as more than enough setup leading up to this final part of the surprise trilogy. This movie could have just been a fast-paced climax that wraps everything up. Instead, we get a slow-paced flick inside of a facility where hardly anything happens for a while. I would have loved it if they just gave the audience a glorious clash between the two superhumans, not just a very anticlimactic fight that is mainly just pushing and shoving. But I understand and respect all of the decisions that were made. I enjoyed this flick, I just think I am going to forget about it as soon as I am done writing this review.

You should definitely go watch this movie in theaters before someone spoils anything for you. As I said, Mr. McAvoy’s acting is magnificent and worth the price of the movie ticket all on its own. The movie is funny, well acted (for the most part), well directed, interesting, and it certainly doesn’t care about anybody’s expectations. I would have loved this movie if it wasn’t for certain anticlimactic moments that occur in the end, but those decisions didn’t make me hate this flick. It just made my feelings for Glass not as transparent as they could have been.

What did you think of Glass? Do you agree or disagree with me? Which flick are you checking out this week? Let me know in the comments below. Have a great day at the movies and don’t forget to save me some popcorn.