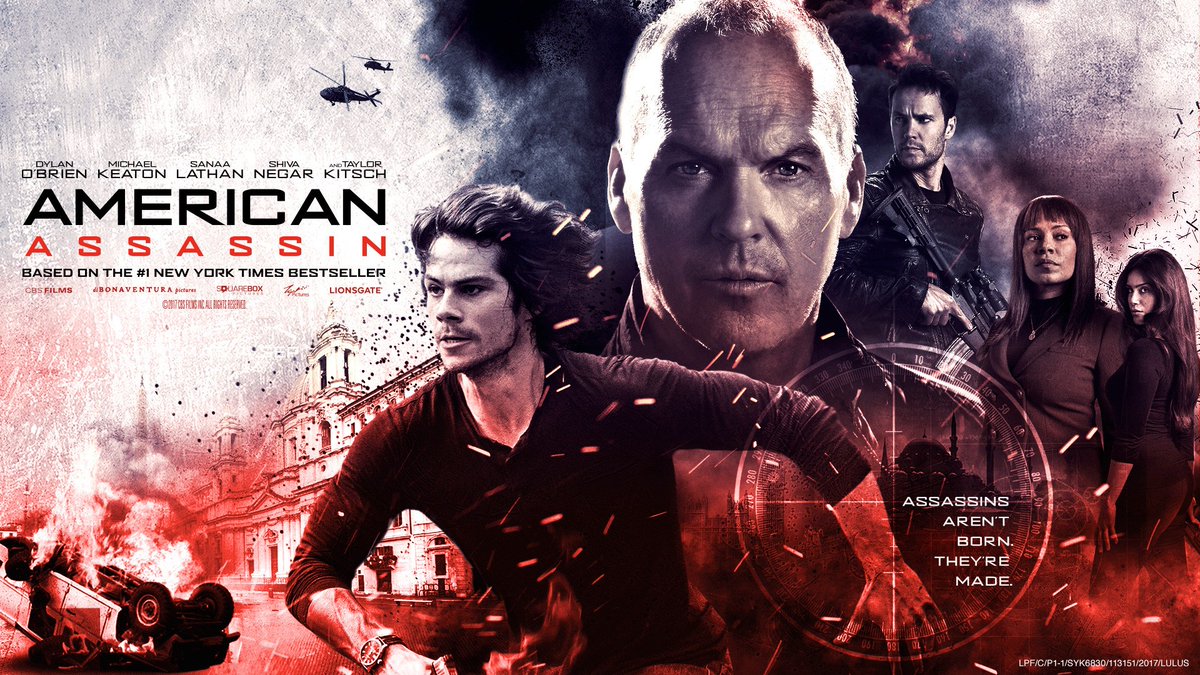 VVNG- My multiple pairs of superhero underwear are more than enough proof that I am a big fan of graphic-novel films. However, I don’t need every single movie to be this type of flick. American Assassin quickly goes from small and grounded, to an over the top, end of the world, superhero-ish type of film. I’m not saying you’re not going to enjoy the fast-paced action or the excellent performances by the superb cast; I just want you to know, beforehand, that you are not going to get a very original movie when you go watch The Recruit… I mean, Captain America…. I mean, Atomic Blonde… I mean, John wick…. I mean, Jason Bourne… I mean…. American Assassin!

The movie starts off with a savagely realistic terrorist attack while Mitch Rapp (Dylan O’Brien from Maze Runner) is on vacation with his lovely girlfriend. I won’t spoil anything, but if you have seen the trailer for this flick, you know a certain blonde does not survive the assault. The massacre is carried out by a bunch of bastards you instantly want Mitch to take down. So he starts training until he is ready to face them and get revenge for the events of that day. This is the movie I wanted to watch… Unfortunately, instead of keeping the premise as simple and as interesting as this. Soon, a bunch of other plot points get thrown into the mix and turn the whole movie into a convoluted, confusing and somewhat generic, wannabe, big-budget Hollywood flick.

I give American Assassin, the “Checky™ Sticker of Tolerance!” The movie that is advertised in the trailers for American Assassin promised me a character that was training to go up against hardcore terrorists. As much as I enjoyed this flick, mainly because of the fantastic cast, I was really disappointed that it lost its focus on terrorists and instead decided to have the character square off against a supervillain type baddie.

I say you can wait until this flick comes out on Redbox, the annoying use of shaky cam is not as bad as in other movies, I mean, it’s still annoying but, at least you can still tell what’s going on. The plot is super confusing and hard to follow and I never really felt a sense of danger. However, there is enough in this film to enjoy, it is entertaining, action-packed and sometimes funny, it’s just not very memorable or outstanding

So, what did you think of American Assassin? Do you agree or disagree with me? Which flick are you checking out this week? Let me know in the comments below. Have a great day at the movies and don’t forget to save me some popcorn.

Official Synopsis: When Cold War veteran Stan Hurley takes CIA black ops recruit Mitch Rapp under his wing, they receive an assignment to investigate a wave of random attacks on both military and civilian targets. After discovering a pattern of violence, Hurley and Rapp join forces with a lethal Turkish agent to stop a mysterious operative who wants to start a global war.