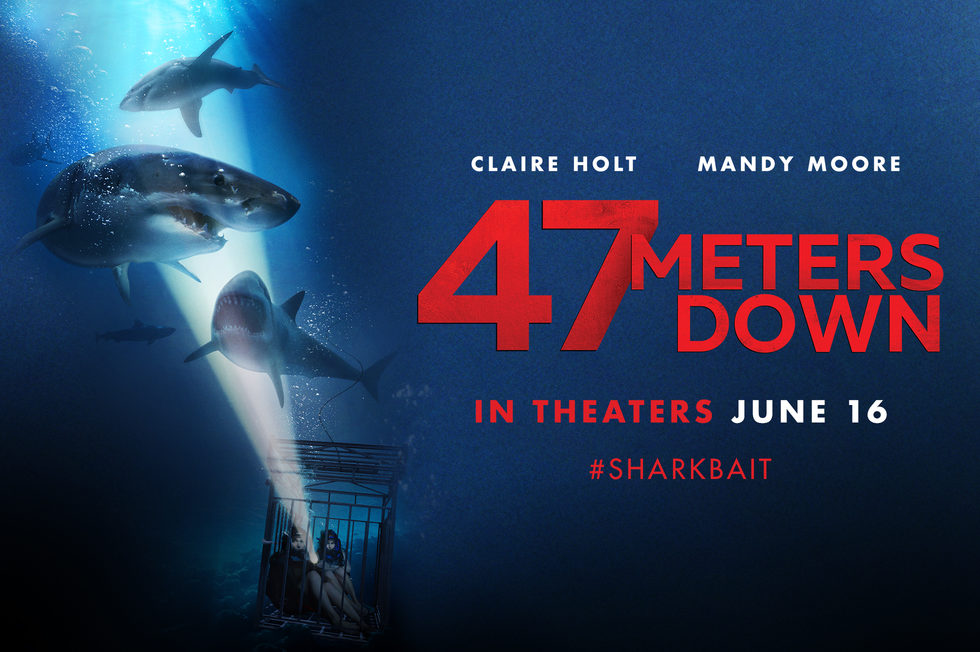 (VVNG.com) – When I was a kid, I used to love playing video games for hours, I enjoyed everything about games like Mario, Sonic, Donkey Kong and Zelda… EXCEPT their annoyingly slow underwater levels. About 80% of this movie reminded me of those pesky levels but with far less excitement. Now, I am not saying that the movie doesn’t provide at least a couple of pretty fun jump scares, the problem is that those moments are too few and far apart. And when a movie baits me with promises of heart-pounding action and instead only delivers heart-tapping (get it?) thrills, well then I really can’t do anything but say, bravo for taking my money and making me feel like chum.

I give 47 Meters Down, the “Checky™ Stamp of Disappointment!” Mandy Moore is not bad in the flick but even she has a few moments of really bad acting. Honestly, I think the CGI sharks acted better than everyone in the film. This movie would have probably been a really good episode of A thousand ways to die… or something similar to that. As a full length feature, however, it feels really stretched out. The runtime for this flick is less than 90 minutes long and sometimes it felt like it was over 2 hours. 2 hours full of slow swimming, heavy breathing, inconsistencies and irrationalities, ear-piercing noises, a few jump scares (that were mostly effective because of the annoyingly loud music that forces you to feel tense), and plenty of stupid people doing stupid things.

I will say, that there is a scene in the film that was exhilarating and action packed and shocking and extremely entertaining and, and… It ended up making me really upset (I won’t spoil why). The only way you might enjoy this movie is if you completely disconnect and ignore everything bad about the flick and just enjoy the 15 to 20 minutes of entertaining material it provides. Or you might want to skip this flick altogether if you are afraid of sharks and…. of underwhelming movies.

So, what did you think of 47 Meters Down? Do you agree or disagree with me? Which flick are you checking out this week? Let me know in the comments below. Have a great day at the movies and don’t forget to save me some popcorn.

Official Synopsis: On the rebound after a devastating break-up, Lisa (Mandy Moore) is ready for adventure while on vacation in Mexico with her sister Kate (Claire Holt). Still, she’s apprehensive when two handsome, fun-loving locals (Yani Gellman and Santiago Segura) suggest the girls join them for a shark-diving excursion on a boat skippered by Captain Taylor (Matthew Modine).

Lowered 16 feet into the Pacific Ocean in a rickety cage, Lisa and Kate catch a once-in-a-lifetime, close-up look at a group of majestic Great Whites. But Lisa’s worst fears materialize when the cage breaks away from the boat and plummets 47 meters–more than 150 feet–down to the seabed. To their horror, the sisters discover they are too deep to radio for help without leaving the cage and making themselves vulnerable to the voracious sharks, and a rapid ascent would lead to the potentially deadly condition known as the bends. With their oxygen supplies rapidly dwindling, the girls do everything in their power to get to safety, even as a series of calamitous events makes it increasingly likely they won’t escape their underwater prison alive.