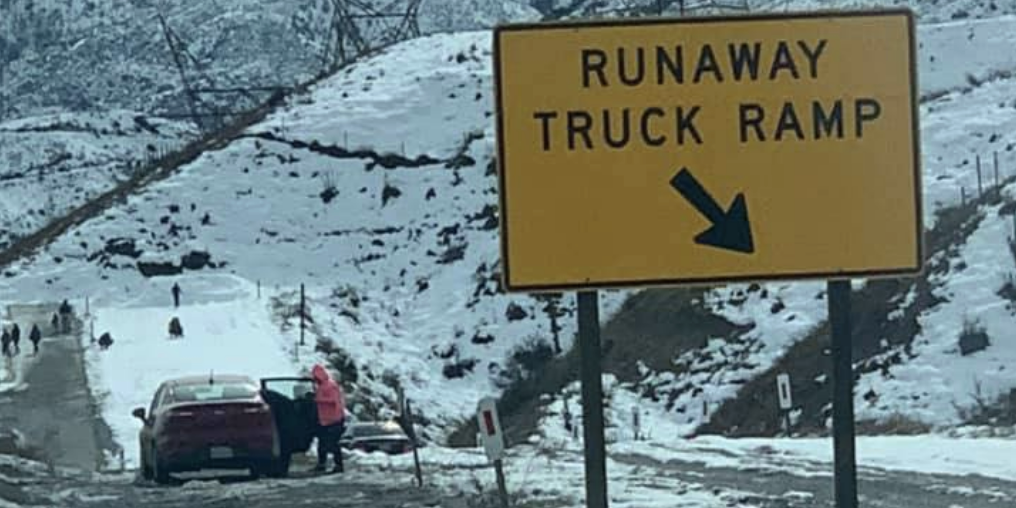 CAJON PASS, Calif. (VVNG.com) — Saturday was another busy day for the California Highway Patrol as they received numerous calls reporting motorists stopping to play in the snow along the I-15 freeway in the cajon pass.

On Saturday, November 30, 2019, at 8:32 am, dispatch logged a call on the NB I-15, north of Oak Hill Road of several vehicles pulled over to the right shoulder and people playing in the snow.

At 12:23 pm a traffic hazard was reported on the southbound I-15 at the runaway truck ramp.

Victor Valley News Group member Shirley McConnell was traveling though the pass when she was flabbergasted by the hoards of people pulled over to play in the snow.

According to CHP incident logs, six vehicles were pulled over and twelve people were out of their vehicle and snowboarding on the truck ramp.

“People are out of their cars on the 15 freeway on cajon pass playing in the snow with their children. “They are on the truck runaway ramp. I hope a truck does not lose its brakes and need to use it. This is a shame,” stated McConnell.

A similar problem was reported by motorists traveling northbound on the I-15 in the Mountain Pass area.

Thankfully no injuries were reported.

A Runaway Truck Ramp is is a traffic device that enables vehicles that are having braking problems to safely stop. They are typically a long, sand or gravel-filled lane connected to a steep downhill grade section of a main road, and is designed to accommodate large trucks or buses.

According to CA Vehicle Code 22500.1 – No person shall stop, park, or leave standing any vehicle, whether attended or unattended, except when necessary to avoid conflict with other traffic or in compliance with the directions of a peace officer or official traffic control device along the edge of any highway, at any curb, or in any location in a publicly or privately owned or operated off-street parking facility, designated as a fire lane by the fire department or fire district with jurisdiction over the area in which the place is located.