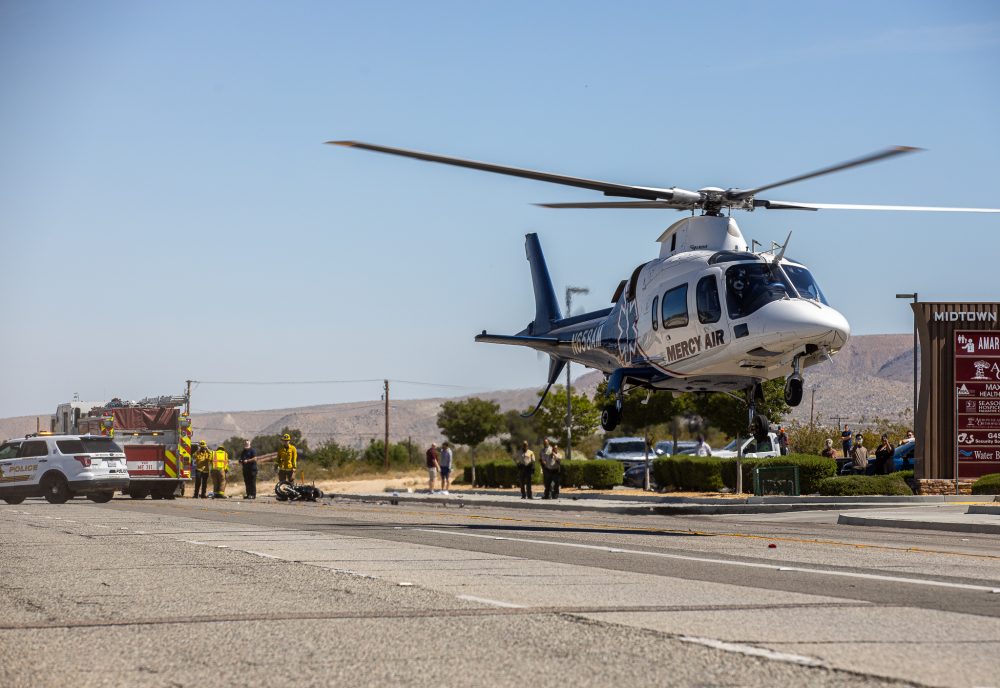 VICTORVILLE, Calif. (VVNG.com) — A stretch of Amargosa Road in Victorville was temporarily closed following a motorcycle crash on Wednesday.

At about 9:54 am, on May 13, 2020, deputies and first responders were dispatched to a crash involving a vehicle and a motorcycle on Amargosa Road and Midtown Drive, near the Winco shopping center.

Upon arrival, deputies found the rider down in the roadway, and several feet away was the bike, a black 2002 Suzuki GSF. A red Ford Mustang with rear end-damage was stopped further north from the impact on Amargosa Road.

Victorville City Firefighters requested an airship to respond to the scene and airlift the rider to a trauma center.

Deputies shut down Amargosa Road between Midtown Drive and Dakota Street while a Mercy Air helicopter landed in the roadway.

Sheriff’s spokeswoman Mara Rodriguez told VVNG it was initially believed the motorcyclist had run a red light, however, it was later determined the driver of the Mustang crossed into the motorcycle’s lane and caused him to rear-end the vehicle.

Rodriguez said the rider was awake and communicating with officers. The driver of the vehicle remained at the scene and cooperated with police during the investigation.

Anyone with information is asked to call the Victorville Police Deparment at 720-241-2911.