VICTORVILLE:(VVNG.com)- A male reported to be in his early 20’s was airlifted following a Friday night crash in Victorville. The collision was reported at approximately 8:30 P.M., on Friday, August 21, 2015.

For unknown reasons, a red four door sedan and a black motorcycle collided on Mariposa Road between the Red Roof Inn and Southwest Gas Corporation.

“I heard a crash, looked outside and I seen him (the motorcyclist) rolling backwards”, stated a witness who wanted to remain anonymous. “He was talking, he said his shoulder, leg and neck were hurting. He was responsive and talking,” he continued to say.

The sedan had major front end damage and the motorcycle remained on its side wrecked in the street.

Northbound traffic on Mariposa Road was blocked while deputies investigated the crash. The roadway reopened at about 9:30 P.M.

The unidentified motorcyclist was transported by ground ambulance to Desert Valley Hospital. From there he was airlifted to Loma Linda University Medical Center. 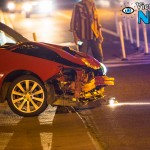 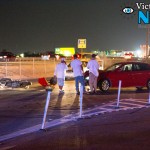 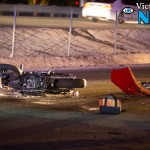