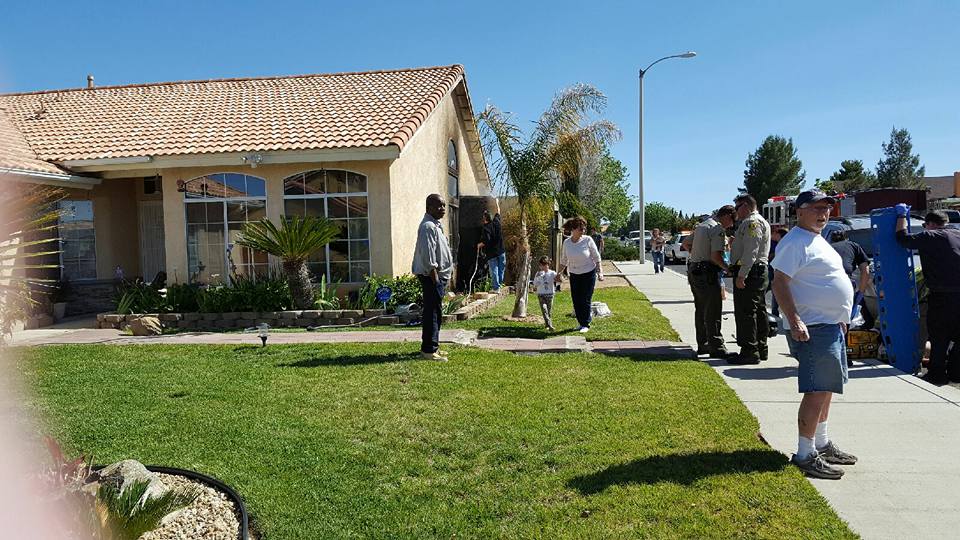 VICTORVILLE-(VVNG.com):  A motorcyclist was airlifted after colliding with a pickup truck Saturday afternoon. At 3:25 p.m. deputies from the Victorville station and medical personnel were dispatched to the area of Petaluma Road and Hillsborough Drive.

The reporting party told dispatchers that the motorcyclist hit a truck, and was thrown from his motorcycle. Leaving him lying in the gutter area near the sidewalk.

“The motorcyclist hit the truck so hard it pushed it back into the street. He went airborne and hit a jeep a few houses down. His bike hit the house and burst into flames,” said Christel Valle-Reyna. Christel’s son, Joshua Speiginer and some of his Anti-Bullying show dancers alerted the homeowner to the fire and they were able to quickly extinguish the fire.

Just before the incident, witnesses said that the motorcyclist was speeding up and down the street doing wheelies. “The motorcycle hit the truck. He hit one of our dancer’s trucks by passing on the left after racing up and down the street. My husband ran to him and stood with him until the ambulance came while I kept his little girl and his little brother in my garage away from the accident,” said witness Darlene Valle.

The rider, 22-year-old, Joseph Acevedo was airlifted to Arrowhead Regional Medical Center, where he had emergency surgery.  The motorcyclist’s grandmother, Susan Acevedo told Victor Valley News on Saturday evening that he is stable at this time but had his spleen removed, has several broken bones, and major road rash. She said he is now awake and only recalls getting on his motorcycle, but nothing after.

The driver of the truck was transported to Desert Valley Hospital and treated for a broken foot. There were no other injuries reported as a result of this collision.

Homeowner, Laura SantaCruz told Victor Valley News that her husband was just outside working in the yard just moments before the collision. She called him into the house to tell him that family was coming over.  “If he hadn’t come in, he could have been involved in the accident. He had been trimming the tree on that side,” said SantaCruz. She says that her house, fence and shed all caught fire causing the windows on that side of their home to shatter.

“My husband and son-in-law got the water hoses and was putting out the fire when the fire department came and continued to put the fire out,” she said. She said that he home is still livable, but there is some carpet, wall, window and other damage. “All this will be fixed, we are just hoping and praying for this boy’s recovery,” added SantaCruz