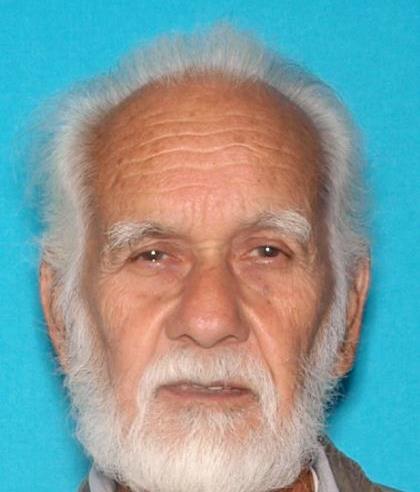 MORONGO VALLEY: The San Bernardino County Sheriff’s Department, Morongo Basin Station, is seeking the public’s assistance in locating 75 YOA Oscar Nava.  Nava suffers from age related diminished mental capacity and may not be aware of his location, or understand where he is going or has been.

Nava left his residence in Yucca Valley during the afternoon of April 5, 2014, driving a white Ford Ranger truck.  Initial efforts to locate Nava were unsuccessful.  His vehicle was located abandoned on April 6, 2014 on the west side of a vacant business on the corner of SR62 and Kickapoo, Yucca Valley.  A witness in the area reported seeing a male fitting Nava’s description leaving the vehicle on foot and walking west on State Route 62 during the afternoon hours of April 5, 2014.  The witness did not contact law enforcement at that time.

An intensive search for Nava followed involving numerous sheriff’s department ground and air resources.  During the investigation, deputies discovered that Nava’s wallet was located by a citizen near the intersection of SR62 and Samel Dr, Morongo Valley, on April 6, 2014 at about 1000 – 1100.  This location is several miles west of where his vehicle was found.

Nava is white male, approximately 6’0″, 160 pounds with gray hair, gray eyebrows and a gray beard.  His current appearance is very similar to the attached photograph.  He was last seen wearing blue jeans, brown boots, a green or gray shirt or jacket and a blue baseball hat.

Nava has gone missing several prior times and has been located in the Palm Springs, Indio and Imperial County areas.  At this time, there is no indication that Nava has been the victim of any crime.

Anyone who sees Nava, has recently seen Nava, or has information on his whereabouts is asked to call their local law enforcement agency or the San Bernardino County Sheriff’s Department, Morongo Basin Station.