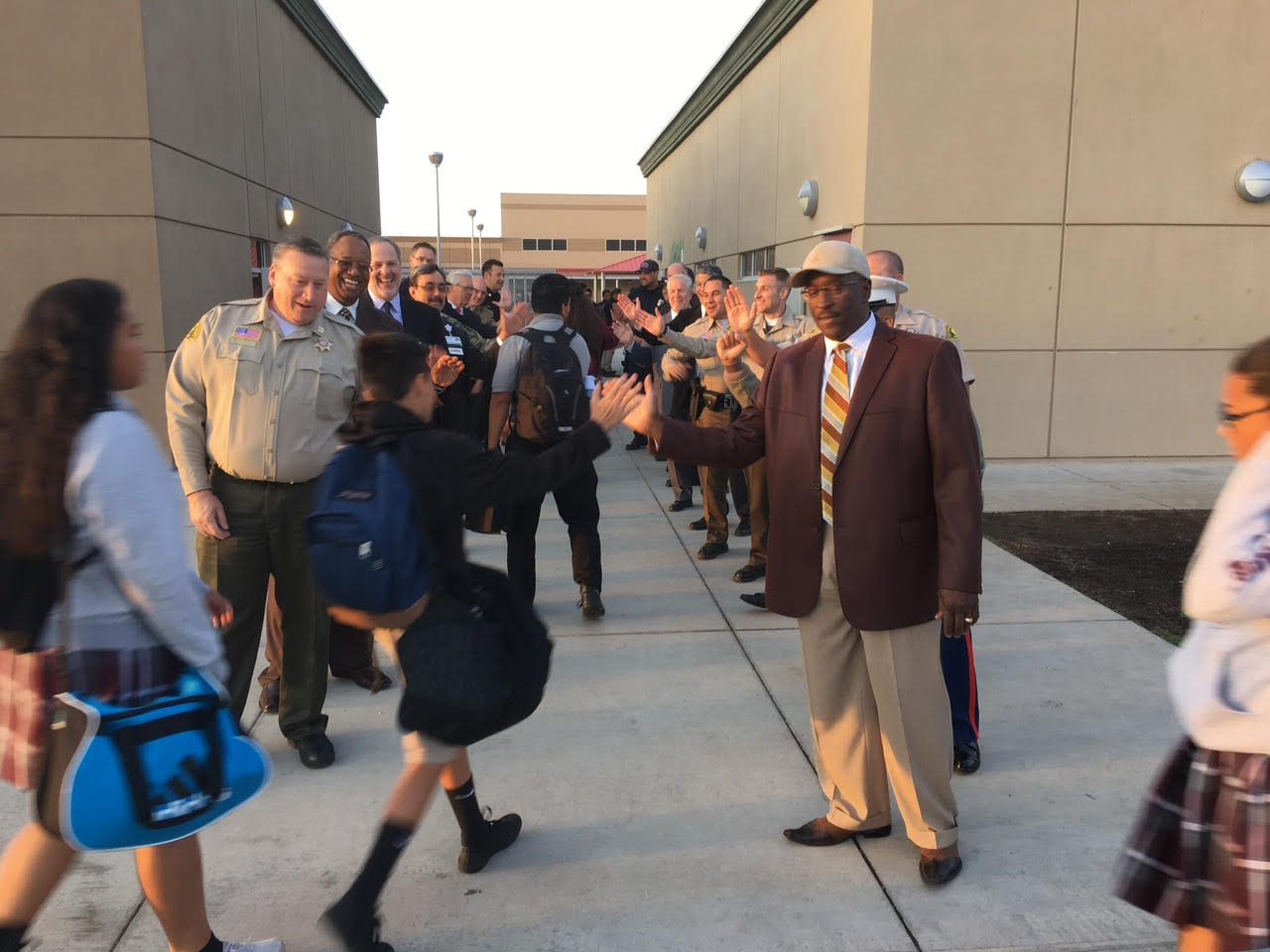 VICTORVILLE-(VVNG.com):  Nearly two dozen men enthusiastically greeted students Wednesday at the front gate of University Preparatory School in Victorville in the latest “Men Mob” event — a show of support, kindness and encouragement for students around the High Desert.

The men, business leaders, Sheriff’s Deputies, County Firefighters, pastors and others, formed a gauntlet, high-fiving and chanting encouragement as students arrived on campus and streamed through the dual columns of men.

The random act of kindness and show of support is aimed at brightening the start of the day for students, to encourage them to work hard and be kind to one another. It’s also aimed at showing students that many people in the community care about their success.

One appreciative student stopped, pulled out his violin and serenaded the unexpected group of greeters, which included Army Soldiers and Marines.

“I appreciate the men of the High Desert for partnering with us and putting together numerous  #MenMobs at their local schools,” said Terrance Stone, CEO of Young Visionaries Youth Leadership Academy. “It is important that our youth see positive, professional men in their community in suits and business attire and uniform so they can know that the world is theirs and they can accomplish all of their goals in life.”

“The Men Mob is a fun partnership that shows kids we care about them and their success in school and beyond,” said First District County Supervisor Robert Lovingood, whose staff organized and participated in the event.

It was also an opportunity for kids to see good local role models. Some parents, too, got a kick out of the sight, said Curtis Green, district representative for Supervisor Lovingood.

“It was great to see the surprise on the faces of the students as well as the parents as they dropped off their kids for school this morning,” Green said. “Parents were actually getting out of their cars to take pictures and video of the men high-fiving the kids.”

The idea for the “Men Mob” came from an informal group, known as “The Fellas” to encourage kids to study hard and to let them know that although the kids may not see them, they have many supporters rooting for them.

Stone, whose organization has been seen on HBO, MSNBC, TBN and CBS, said civic groups and men’s organizations are encouraged to expand the effort.

“You don’t have to wait for us,” Stone said. “If you want to do a “Man Mob” you can get some men together and contact the school, go out there and just support those kids.”

For more information, visit www.YVYLA-IE.org. On Facebook search “The Fellas.”