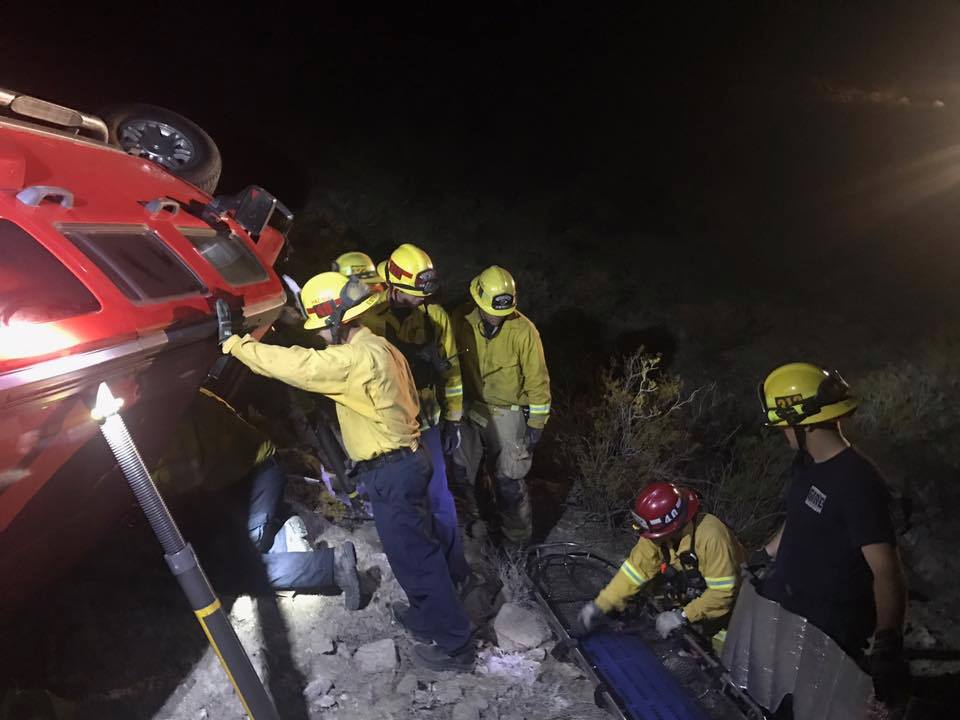 ADELANTO, CALIF.(VVNG.com)- Firefighters helped rescue a woman from underneath a rolled over vehicle after missing for five days

On Saturday, October 29th at about 6:11 p.m. San Bernardino County Fire received reports of a vehicle rollover in a desert area off Torosa Road west of Highway 395 north of the city of Adelanto.

Initial reports stated a vehicle had rolled down a hill, and one occupant was trapped.

Medic Engine 322 crew arrived on scene several minutes after dispatch and reported a Humvee rolled over mid-slope in an area inaccessible to fire apparatus.

With the help of San Bernardino County Sheriff’s Department off-road patrol vehicles, Firefighters were transported into the scene. County Firefighters and Urban Search and Rescue members stabilized the vehicle using rescue struts and also used a rope system secured to an anchor, which prevented the vehicle from rolling further down the hill. Once the vehicle was secured the victim was rescued from the vehicle. The entire operation took approximately one hour to complete.

During the rescue operation, it was discovered that the sole occupant of the vehicle, an older adult female, was reported to have been missing for five days. Once removed from the vehicle she was provided advanced life support treatment on scene and transported via Mercy Air to Arrowhead Regional Medical Center. Her condition at the time of this release is reported as serious but non-life threatening.

County Fire responded with 2 paramedic engines, 1 heavy rescue , 1 brush patrol, and 1 battalion chief for a total of 12 personnel. For further information on the missing person component of this incident contact the San Bernardino County Sheriff’s Department.