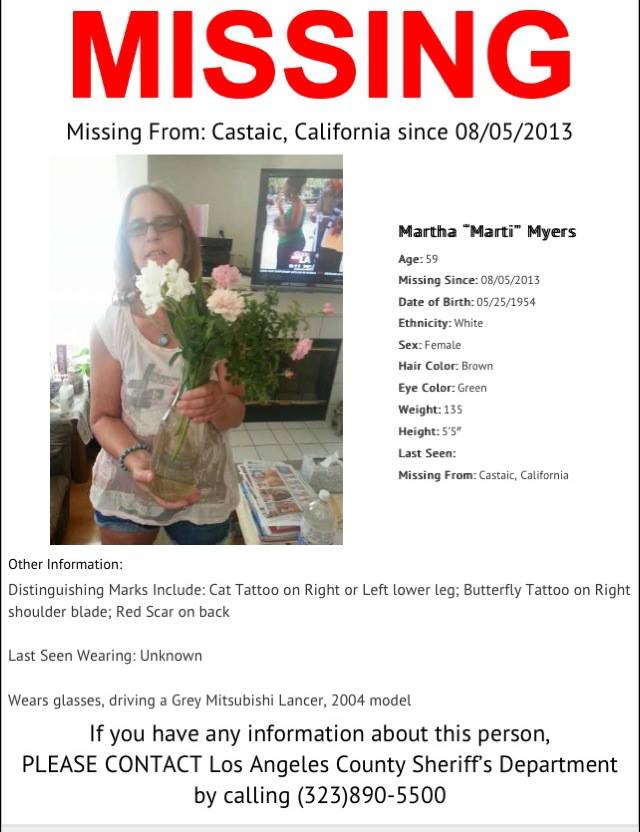 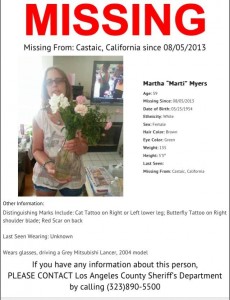 A woman from the L.A area Martha “Marti” Myers went missing almost two weeks ago. Meyers suffers from Bipolar Disorder and Depression. The family desperately seeks help in locating the missing person citing that her medication needs to be refilled and must be taken.

Meyers was last heard from on August 6, 2013 when she phoned her roommates Sharon and Collin Ball at 1 a.m and stated her car had broken down.

The call was very brief, “she said she’s stuck in Palmdale and the car won’t go in reverse, and the phone just went dead,” said Collin Ball.

Children of Meyers have been contacting news agencies and passing out flyers in hopes to locate their mom. A Facebook page called Find Marti  Meyers was launched by her daughters to assist in the search efforts.

“This [is the] woman who taught me how to scramble an egg, how to cross stitch, how to get over a breakup. I am beside myself with grief,” says daughter Stephanie Berger.

A pilot of a small aircraft volunteered their time in the search efforts for Marti.

Official state that no bank activity or phone calls have occurred since her disappearance and her last phone call was made in the general area of Mojave/Rosamund. Her grey 2004 Mitsubishi Lancer (CA PLATE #6FWB048) has yet to be located.

If you have any information that may assist in this search please contact Los Angeles Sheriffs Department : (323) 890-5500.

www.VVNG.com for Everything Victor Valley & More.