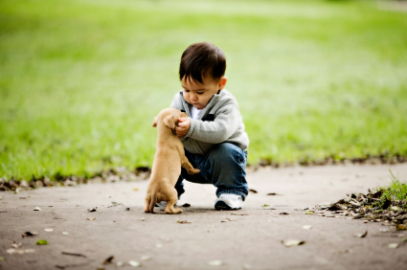 NEWBERRY SPRINGS-(VVNG.com): A small boy was reported missing from the Newberry Springs near National Trails Highway per scanner traffic on Saturday evening. It was reported that the juvenile boy that was two to three years of age left out the door chasing his Pitbull mix puppy at about 4:00 p.m.

A sheriff’s helicopter, ground patrols as well as bloodhounds were called to help locate the small child. The bloodhounds traced the scent of the child several times, but never were able to locate him. Deputies on scene reported a large presence of coyotes. large stacks of tires, and large bodies of water that could present dangers to the child nearby.

Residents in the area wondered, but did not know the reason for the low flying helicopters with large spotlights near their homes. One resident, Helen Sullivan, that lived very close to the search said that she was unable to sleep well knowing something was happening so close to home.

Sullivan said that on Sunday morning at about 5:00 a.m. when it was still dark outside she still could see the lights from the Sheriff’s patrol vehicles about a mile down the road. She realized then, that they were still searching for something, but for what, she did not know. At 7:00 a.m. Sullivan said that the helicopter again began to search making her decide to drive to where the Sheriff patrol units were about a mile from her home to ask what they were looking for.

“I slowly drove down the mile long dirt road looking for something out of the ordinary and cautiously with locked doors looked around, about half way down I noticed a very cute Black puppy about 30 feet away from the road. I stopped put down the window and called out to the puppy, he wagged his tail but didn’t move from his spot,” said Sullivan, on a Facebook post. She said she then heard a faint cry in the area, and next to the puppy was the small boy.

Sullivan said she jumped out of the car, fast, but in a way where she did not scare the baby boy and she had her husband call 911 to report her finding.

“I know God watched over him last night his faithful puppy had kept him warm and was his companion in the dark, I regret not knowing sooner who they were looking for, because I would have been out there looking also. Prayers for the little guy who endured the night lost in the desert,” said Sullivan.

Victor Valley News has reached out to the San Bernardino County Sheriff’s Department for more information, but they had no information to release at this time.