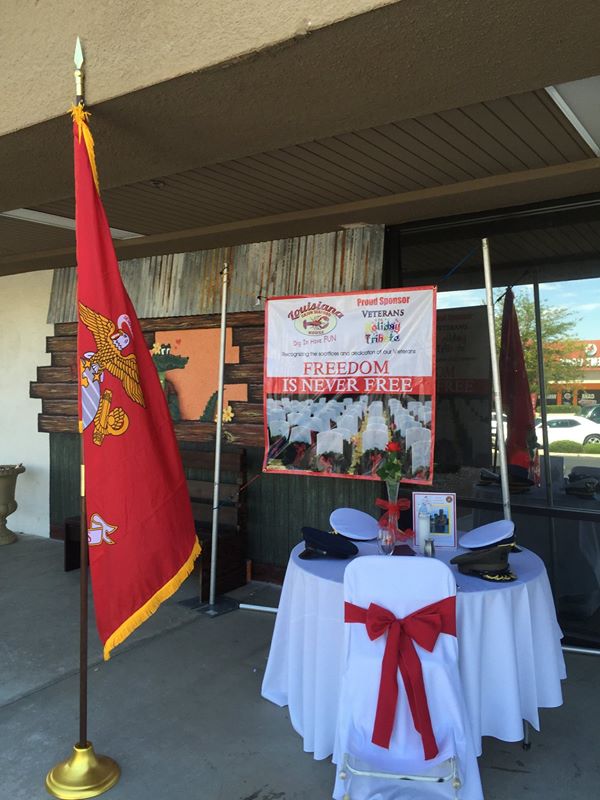 VICTORVILLE:(VVNG.com)- At about 9:30 PM, on Saturday, Dan Tate made a quick stop at Lowe’s located on the 14300 block of Bear Valley Road in Victorville.

Dan was in the store for less than 10 minutes before returning back to his truck. Not only was Dan shocked but also heartbroken to learn that someone had just stolen some very sentimental items.

The stolen items are part of a Missing Man Presentation used to honor America’s Men and Women as well as Captain (USMC) Jeff Kuss, Don Ferrarese’s grandson by marriage. Captain Kuss is the Blue Angel pilot who lost his life on Thursday, June 2, 2016, while training for an air show in Tennessee.

The items were all packed away in several tub containers in the back of Dan’s truck. Amongst the items stolen are five new military covers (hats), complete table setting for 6, bible, vase, table cloth, chair cover, and sash. Combined the items are worth about $1,000.

Dan Tate runs Don Ferrarese’s charitable foundation that gives back to the Victor Valley in many ways. A couple of hours before the theft, Dan was assisting the foundation awarding $44,000 in scholarships during an afternoon luncheon. The Missing Man Presentation was on display outside of Louisiana Cajun Seafood House in Victorville.

“At first, I felt demoralized. Then simply angry that others think their needs are more important than others,” says Dan. “We generally hear how people need to do more and the more you do the more things like this seem to happen.”