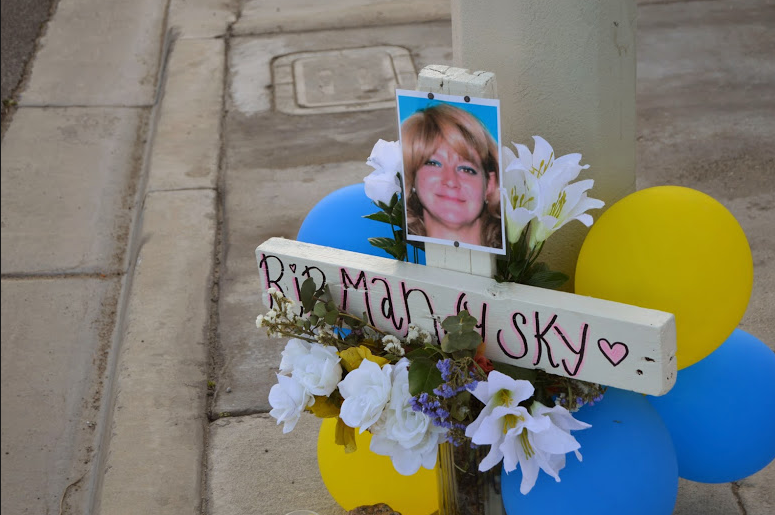 VICTORVILLE-(VVNG.com): On Friday, February 20th at 4:30 p.m. friends of a hit-and-run victim showed up for a beautiful display of friendship and love for 39-year-old Victorville resident, Mandy Joy Sky

At the time of the hit-and-run that took her life was living on the streets. Although she had a home, friends say she was suffering from mental illness and a drug addiction causing her to leave her home, husband and four children.

According to friends, Mandy had a restraining order placed against her not allowing her to go home, but her family, including her husband, did care deeply for her. Just hours prior to Mandy losing her life, friends say she called her husband in fear for her safety. Her husband, being out-of-town for the night told her he would pick her up the

following morning when he returned.

Friends believe the hit-and-run was intentional after seeing the video footage, the car wash owner, who also saw the video agreed saying, “There was a motorcycle following closely behind the truck. The person on the motorcycle had to have witnessed her being hit and could have easily seen the vehicle information.”

Friends of Sky,  believe it was a late-model tan Chevrolet truck that hit her while she was walking in the street, which she often did. They also believe that the truck looks a lot like one that belongs to a Los Angeles man who goes by the name “Slim” that had been threatening her.

Although many felt that the incident was intentional, one man did mention the speed limit in the area being 45-50

miles per hour and that he believed that with the high amount of foot traffic in the area it should be reduced to 30-35 miles per hour.

Approximately 20 people attended her Memorial just feet from the scene of where Mandy was hit and the driver callously sped away from the scene. Friend Susan Padilla spoke to the group that attended saying, “Sure, she had issues. Who here does not? Who is anyone to judge? I love drugs addicts, I love alcoholics, I love everyone”. The memorial was full of laughs, tears, prayer and some anger at how their friend was left dead on the roadway.

The incident is still under investigation, anyone with information is urged to contact the Victorville Police Department at 760-241-2911 or if you wish to remain anonymous you may call by call we-tip at 1-800-78-CRIME.