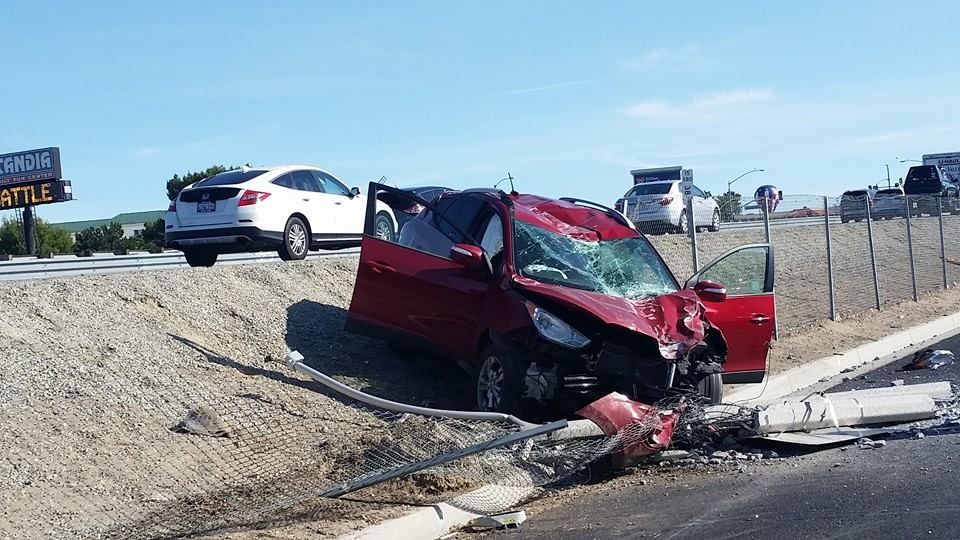 VICTORVILLE-(VVNG.com): A vehicle that veered off the freeway and ultimately crashed through a chain linked fence snarled traffic traveling through Victorville on the Memorial Day Holiday.

According to CHP incident logs, the collision was reported at 5:06 P.M., on Monday, May 25, 2015. Even though the accident did not occur on the freeway, the two-vehicle traffic collision slowed traffic on the I-15 Southbound lanes from Roy Rogers Drive to just south of the Mariposa near King Ranch Road.

The vehicle, that was not blocking any freeway lanes, caused looky-loo traffic, which slowed the commute from an already delayed holiday drive.

For unknown reasons, a late-model red SUV traveling on the southbound 15 freeway went off the roadway, through a chain link fence ultimately knocking over a light pole and hitting a white Nissan Altima in the #2 lane of northbound Amargosa Road traffic.

The driver, of the red SUV, according to witness reports, was arguing with his female passenger in the vehicle prior to the collision. The male had an injury to his forehead area that he told deputies occurred before the collision.

There were no injuries reported as a result of the collision. Information will be updated as it is received.