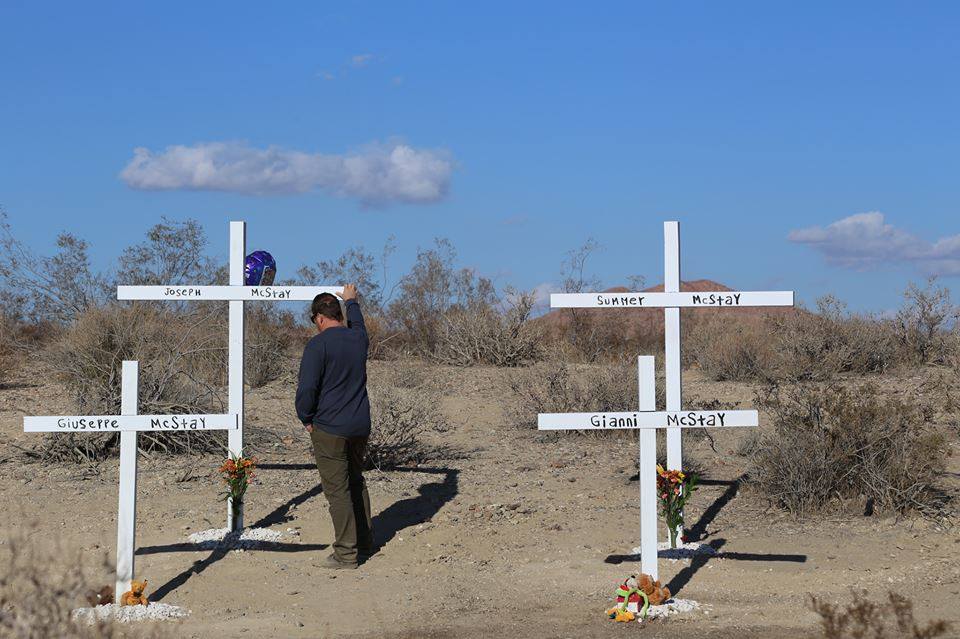 On Friday, November 22, 2013 at 3:30 p.m., California Department of Justice DNA Lab notified the Sheriff’s Department Coroner Division that the remains of two children have been positively identified as Joseph M. and Gianni McStay, the sons of Joseph and Summer McStay. There is no further information available at this time.

Friends, family and Victorville residents gathered in the desert Wednesday to post crosses as a memorial for the members of the McStay family whose remains were found there earlier this month.

Many people who had never met the family traveled into the desert Wednesday to pay respects to the family, some who had also lost loved ones. Four white crosses marked the area where the bodies were found, names of each member written on the crosses and flowers covering the ground below.

The brother of Joseph McStay, Mike McStay made the journey to the desert to see for himself where his brother’s body was found.

“What was hidden is out in the open, and we can catch the individuals who did this,” he said. (source: NBC Los Angeles)

The skeletal remains have been confirmed to be 2 adults and 2 children.

Sheriff’s Department and the FBI. “Every available resource will be utilized in this investigation to identify the suspects involved in this heinous crime and bring them to justice,” stated Sheriff John McMahon.

The autopsies began on Thursday, November 14th, and are expected to be completed today. The manner of death has been determined to be homicide; the cause of death will not be released to protect the investigation.

*********
Update – Wednesday, November 13, 2013 4:35 p.m.
Investigators have completed the scene examination; there were two graves where remains were located as well as additional skeletel remains that were located near the graves. A grave site recovery is a very meticulous process in efforts to preserve all possible evidence. A third site was excavated however, no evidence was found and the location was determined to be unrelated to the grave site.

********************************
On Monday, November 11, 2013 at approximately 10:00 a.m., deputies from the Victorville Sheriff’s Station were dispatched to the desert area between Quarry Road and I15, north of Stoddard Wells Road in the county area of Victorville, following the report of possible skeletal remains being located by a motorcyclist.