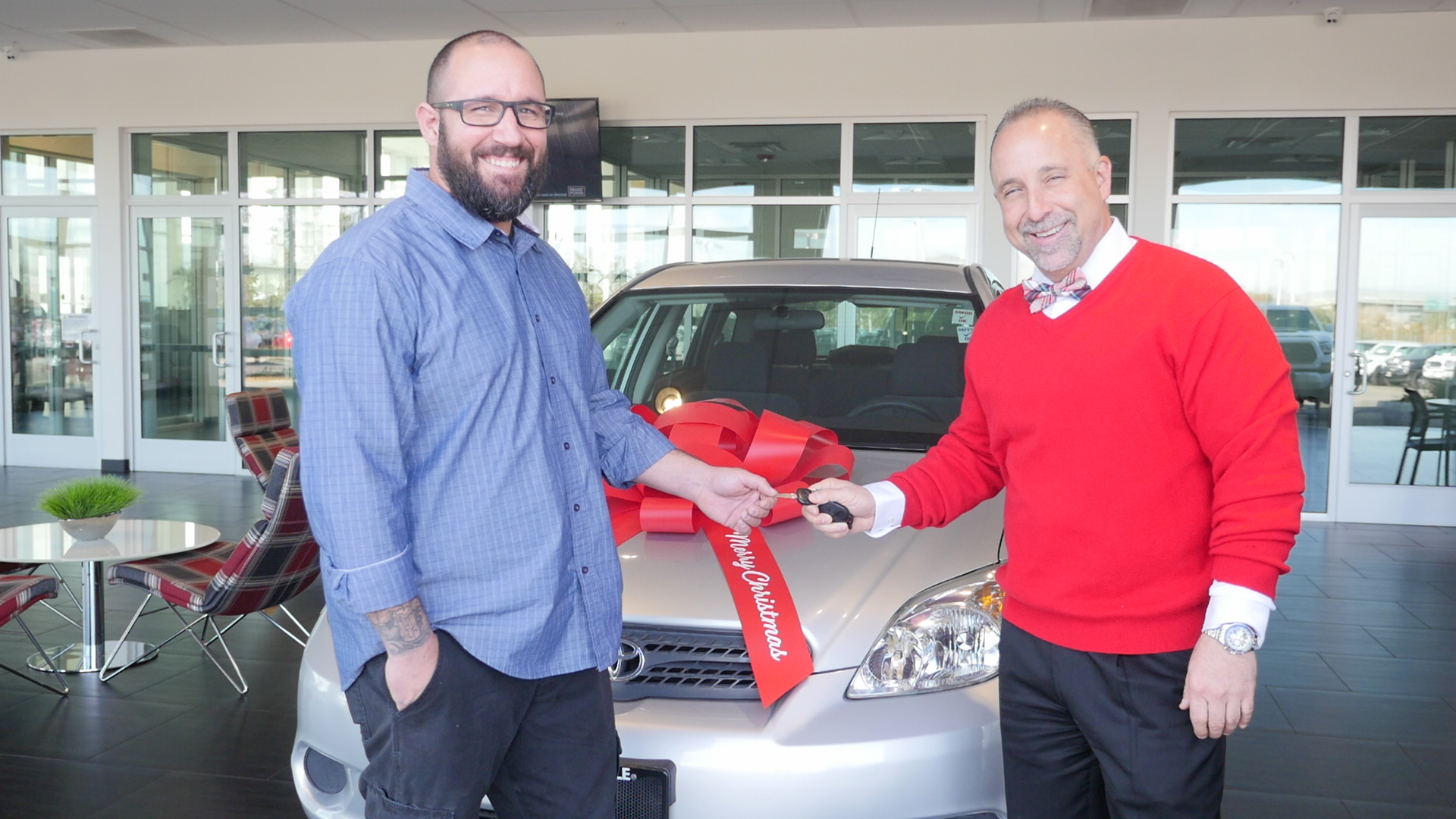 The contest began on Halloween during a Facebook Live reveal of a 2006 Toyota Matrix. Over four thousand comments of “IWANNAWIN” qualified people to win.

On Veterans Day, the Victorville Toyota dealership asked people to nominate a Veteran where 4 random Vets would qualify automatically. In the end, 26 total finalists were place on Christmas trees. Only 18 would make the “Nice List” and make it on a wheel. Toyota General Manager donned a Santa hat with “Nice” embroidered on it. After the 18 made the wheel, he suddenly changed his hat to say, “Naughty.”

“I thought it would be a clever way to reward then penalize contestants in a fun way,” said Stokes. Evelyn, Ashley, and Todd took turns and spun the wheel where the last person standing would win the car. Winner Ahlstrom was at work in Barstow, at BSNF- his wife, Megan was recording her reaction as the contest drew closer to the end.

“I think it’s awesome to get people’s reactions while we’re broadcasting on Facebook Live,” said giveaway coordinator and Creative Director, Brian Ortega. “It’s all about video now and to have that moment it so entertaining.” Megan Ahlstrom recorded her expression, which is priceless. Ian and Megan have two young children and reside in Apple Valley.

“This car is definitely going to help my family as it will serve as my commuter vehicle,” said Ahlstrom, “It’s my first Toyota and my parents-in-law love their Toyotas that they actually bought from Valley Hi Toyota. We’re going to have an amazing Christmas.” Ahlstrom served from 2006-2012 as a Tank Crewman at Camp Pendleton and did one tour in Iraq in 2008.

“We’re not stopping in 2019,” said Ortega. “It’s such a life-changing event for families and we have a blast being engaged with the High Desert community. Although it’s open to all Californians, the local Desert community is the most involved.

Valley Hi Toyota has given away 17 vehicles in 3 1/2 year. New and Pre-Owned vehicles are on sale during the year end event, Toyotathon. Ask about specials and no money down options at valleyhitoyota.com