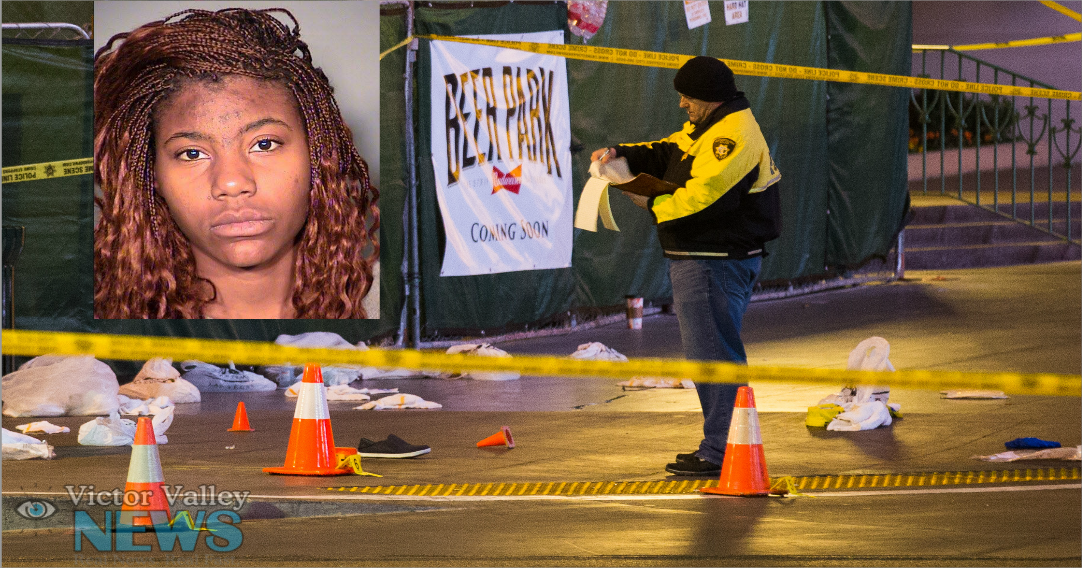 LAS VEGAS-(VVNG.com): The 24-year-old woman who plowed through a busy sidewalk full of people injuring dozens and killing one on the Las Vegas strip on the evening of Sunday, December 20th was found to be under the influence of Marijuana the Clark County District Attorney said. Lakeisha Nicole Holloway, the woman that authorities said purposely drove through the crowded area between the Planet Hollywood Resort and Casino and Paris Las Vegas Resorts with her three-year old daughter in the car was arrested shortly after the incident.

Witnesses said that Holloway drove a 1996 Oldsmobile with Oregon plates with all four wheels on the sidewalk at some points, they said she went back onto the roadway and again sped up to go back onto the sidewalk. Arizona resident 32-year-old Jessica Valenzuela,  who was a wife and mother was dragged along with the vehicle for nearly 200 yards where she was left with life threatening injuries. She was transported to a local trauma center, but died as a result of her injuries which resulted from what the coroner ruled as a homicide. Thirty-five additional people were injured, many who were rushed to trauma centers for minor to severe injuries.<

Holloway parked her vehicle in a parking garage and exited her vehicle leaving her three-year old daughter secured in her car seat in the vehicle. According to authorities she then calmly walked up to the parking attendant and explained what had just happened. Police said that during the interview Holloway calmly explained how she saw a body bouncing off of her windshield breaking it. She continued to tell them she was not under the influence of drugs or alcohol, but authorities suspected otherwise saying they believed she may have been under the influence of stimulants causing them to order a blood test.

Although Holloway’s defense attorney’s question her impairment based on what they call the very low-level of 3.5 nanograms per milliliter of marijuana found in her system the state law says that anyone with a level of  2 ng/mL or greater of blood or 10 ng/mL or greater of urine should not operate a motor vehicle. Regardless if they charge her with the additional charge of driving under the influence, Holloway faces charges of murder with a deadly weapon, child abuse, neglect or endangerment and leaving the scene of an accident.

The Clark County District Attorney, Steve Wolfson said in a statement, “There is no reasonable explanation or excuse for the actions of this defendant.” Holloway’s attorneys reportedly question her mental health. Holloway remains on suicide watch at the Clark County Detention Center and is being held without bail.