VICTORVILLE, Calif. (VVNG.com) A 32-year-old Victorville man was taken into custody after leading deputies on a brief pursuit on a stolen quad.

On Tuesday, March 14, 2017, at about 8:40 p.m., a deputy reported a failure to yield in the area of Tracy Street and Hesperia Road in Victorville.

Within seconds, Sheriff’s helicopter 40king arrived and assisted ground deputies by following and lighting up the quad as it continued to drive away at a high rate of speed.

The pursuit continued from C Street into Kemper Campbell Ranch Road. The suspect, later identified as James Jay Garfield, attempted to evade deputies by driving through the brush and heading towards the Mojave River.

The quad became stuck, and Garfield was taken into custody without incident.

According to deputies at the scene, the quad was reported stolen, and the suspect had several outstanding warrants.

No injuries were reported as a result of the pursuit.

According to public court records, Garfield is currently being held in lieu of a $100,000 bail for possession of a controlled substance for sale, stolen property, and spousal abuse. Additionally, Garfield’s charges include driving without a license which added $5,000 to his bail and possession of a stolen vehicle for an additional $50,000 to his bail. Combined his bail is set at $155,000.

Garfield is scheduled to be arraigned in a Victorville courtroom on Thursday, March 16th. 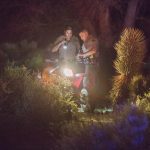 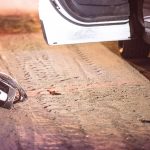 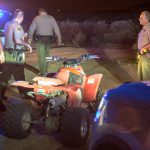