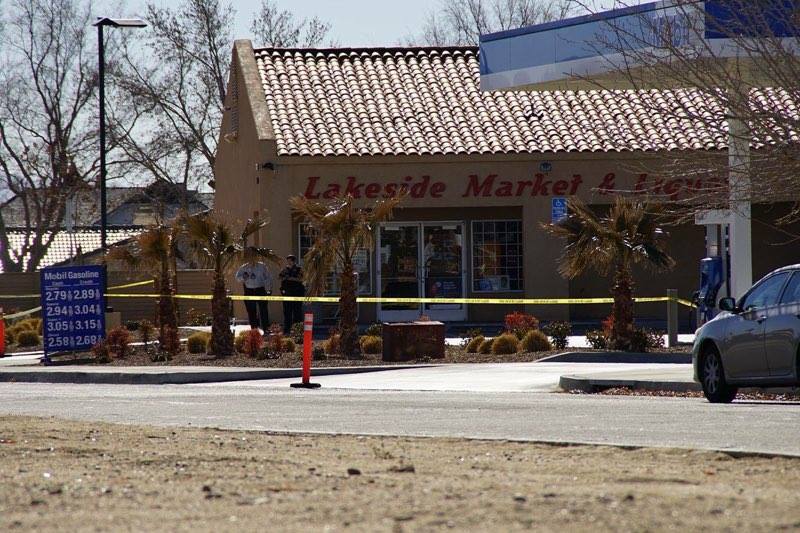 HELENDALE-(VVNG.com):  A Helendale man was killed after being shot multiple times on Tuesday morning.

At about 10:00 a.m. residents from the small tight-knit unincorporated city of Helendale, also known as Silver Lakes started their morning with the sounds of gunfire.

Soon after, 911 dispatchers received numerous calls reporting that a man was shot outside of the Lakeside Mini Mart located at 26800 Blue Water Road. Witnesses said that the two men were fighting in the parking lot, when one of the men, identified as Brandon Todd, shot the other several times and fled the scene.

Upon arrival deputies located the male victim that was reportedly suffering from multiple gunshot wounds. An airship was requested to transport the victim, who was suffering from life-threatening injuries. Per scanner traffic, the airship was later cancelled.

Deputies, aware of the suspects identity, searched the area of his residence near the Silver Lakes community clubhouse where the sheriff’s air unit spotted the suspect entering the garage of a home on Robin Lane. The suspect was detained at his home just before 11:45 a.m. and booked into the High Desert Detention Center for Assault with a Deadly Weapon, and will now be facing murder charges as a result of the shooting.

Victor Valley Sheriff’s Spokeswoman Staci Parks said, “The case is now being handled by the Homicide Division since the man died as a result of his injuries.” Victor Valley News has reached out to San Bernardino Sheriff’s Headquarters for additional information, but they are unavailable for comment at this time.

Area schools were placed on a brief lockdown as a precaution, and the lockdown was lifted as soon as the suspect was detained.