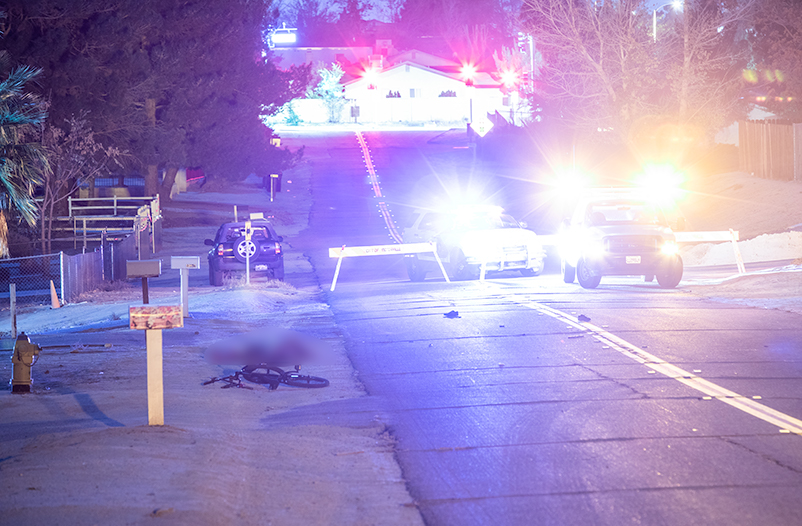 VICTORVILLE, Calif. (VVNG.com) — A man riding a bicycle died after being struck by an SUV Tuesday night in Victorville at about 7:08 p.m., police said.

The rider was hit while riding in the northbound lane of 1st Avenue between Sholic and Winona Streets by a black 1999 black Isuzu, Victorville Deputy Adam Hylin told Victor Valley News.

The bicyclist, described by witnesses as a man in his early 20’s, suffered fatal injuries and was pronounced deceased on scene by San Bernardino County Fire personnel.

“There was a nurse on scene and my dad was helping her tend to him but it was too late,” stated local resident Lacy Quintanar Lucero.

The driver of the involved vehicle remained on scene and cooperated with officials.

“There needs to be more street lights and [sidewalks.] People can’t see pedestrians at all and they have nowhere else to walk or ride their bicycles but in the street,” stated Lucero.

Police say the man was wearing all black clothing and did not appear to have the proper safety equipment for riding at night. A pair of red boxing gloves were found near the deceased male.

According to the California Department of Motor Vehicles website (DMV), each year in California, more than 100 bicyclists are killed and over 10,000 are injured in collisions.

Using lights and reflectors at night is the law in California (CVC §21201).

The DMV says during darkness, bicyclists should avoid wearing dark clothing and must have the following equipment:

The bike was described as black in color. The name of the man who was killed is being withheld until next of kin has been notified.

Police do not believe drugs or alcohol were factors in the crash.