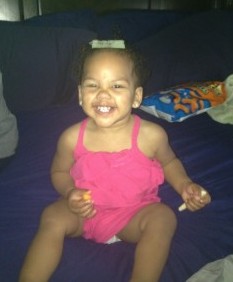 PALMDALE:(VVNG.com)- Matthew Albert Worthen, 24 from Palmdale pleaded no contest on Wednesday, August 20th to fatally beating the 2-year-old daughter of his girlfriend in September 2013.  Worthen entered his plea for one count of second-degree murder before Los Angeles County Superior Court Judge Kathleen Blanchard.

Worthen was charged on Monday, September 30th for fatally beating 2-year-old Zanai Noel to death in their apartment on September 22nd, while the child’s mother left her in his care for a few minutes while she ran errands.  Upon returning home Zanai seemed to be having breathing difficulties and was taken to the hospital where she died.

The injuries of the child resulted in severe internal injuries, rib fractures, hemorrhages, collapsed lung, internal bleeding, and a pulverized liver. Both Homicide Investigators and the Coroner were shocked by the viciousness of the attack on the young child.

Worthen had been arrested in July 2013 for domestic violence against Ayisha Noel, the mother of the child. Zanai’s biological father, Robert Skinner, who her mother said in a lengthy Instagram post, was never in her life, blames Noel for the violent death of their 2-year-old daughter.

Worthen made his no contest plea shortly before jury selection was to begin. He is scheduled to return to court on September 8th when he is expected to be sentenced to 15 years to life in prison.

The case was investigated by the Los Angeles County Sheriff’s Department.