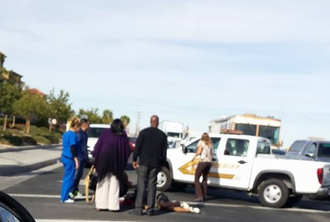 Palmdale Road. The male subject was laying in the crosswalk not moving, which had concerned bystanders.

According to Adelanto Sheriff’s Department Spokeswoman Staci Parks, it was only a medical issue and that the man had a seizure. Medical aid was given at the scene, the deputies spoke to him on the scene and the man continued on his way.

Transport was offered for follow up and as a precaution, which he declined.