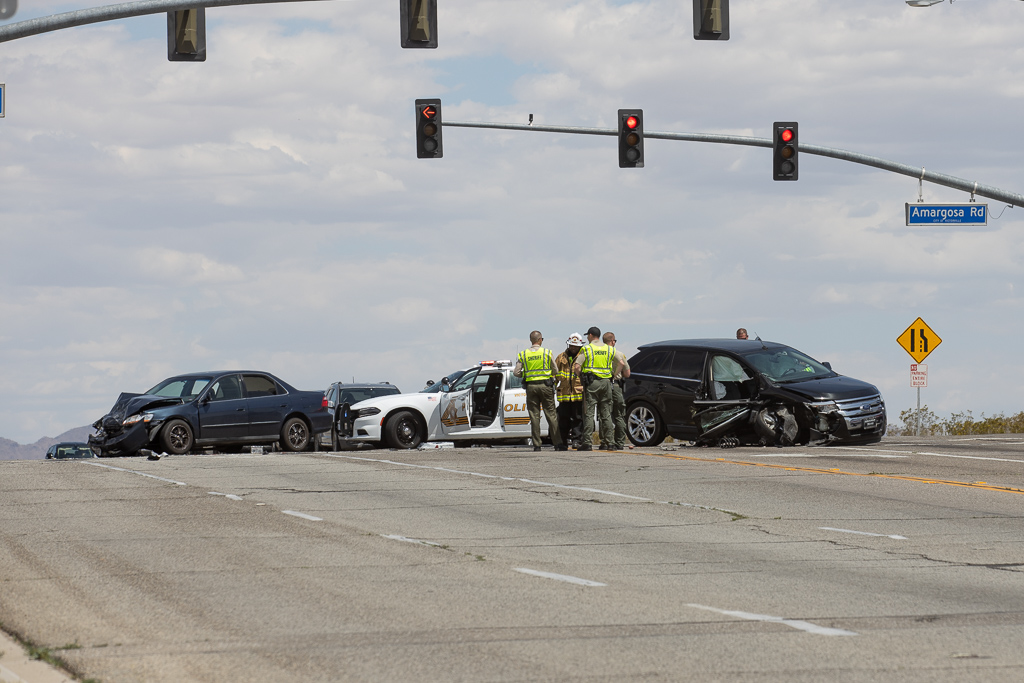 VICTORVILLE, Calif. (VVNG.com) — An elderly man died from his injuries sustained in a crash Monday afternoon in Victorville.

The crash happened at 1:46 p.m. at the intersection of Mojave Drive and Amargosa Road and involved two dark-colored vehicles; a compact Ford SUV and a 2000 Honda Accord.

Victorville City Fire Department and deputies with the San Bernardino County Sheriff’s Department responded to the collision and located multiple people with injuries.

A female passenger from the Ford had to be extricated from the SUV.

“I was driving northbound on Amargosa Road behind the SUV,” stated a driver who wished not to be named, “We were both in the far left lane that goes straight on Amargosa, but last minute he (the driver of the Ford) changed his mind and turned left onto Mojave Drive.”

Witnesses told Victor Valley News that when the Ford turned onto westbound Mojave Drive, it collided with the Honda that was heading southbound on Amargosa Road, causing major damage to both vehicles.

“The man in the Honda was talking at first. He told me he was 83 years old, and then he stopped talking. He was going in and out of consciousness. He didn’t look too good,” the witness told VVNG.

The elderly man was transported to Victor Valley Global Medical Center where, despite life-saving measures, he was pronounced deceased before he could be airlifted.

The male driver of the Ford and his passenger were transported to a local hospital as a precaution.

According to sheriff’s officials, the Honda was traveling south on Amargosa Road.

“As the vehicle proceeded through the intersection at Mojave Drive, on a green light, it was struck by a Ford SUV. The Ford had been traveling north on Amargosa Road when for unknown reasons the driver attempted to make a left turn onto Mojave Drive, crossing into the path of the Honda,” stated the release.

“The intersection of Amargosa Rd. & Mojave Dr. is expected to be closed for approx. 3 hours while deputies conduct a vehicle collision investigation. Please use alternates routes,” the Victorville Police Department said via Twitter on Monday.