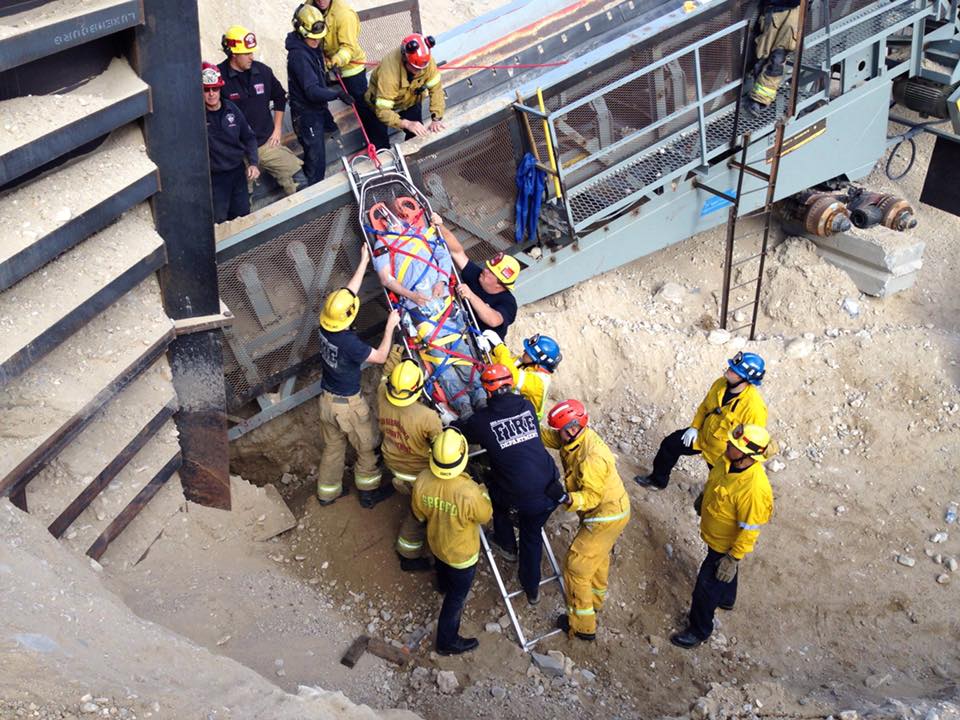 LUCERNE VALLEY, Calif. (VVNG.com) Emergency Personnel rescued a man who was buried waist-deep in a quarry at the Hi-Grade Materials Plant in Lucerne Valley Tuesday morning.

At about 6:20 am San Bernardino County Fire responded to the plant located at 8701 Meridian Road a few miles past Highway 18.

Firefighters arrived on scene and made contact with plant personnel who escorted them down to the pit of the quarry. It was reported that a worker had accessed the lower end of an inclined conveyor belt to clear clogged material.

“The conveyor is fed material that is pushed by heavy equipment from the floor of the quarry through a grate that filters the dirt. While attempting to the clear the jam, the worker was engulfed by additional material pushed over the grate by a dozer,” said San Bernardino County Fire in a press release.

First responding units were reinforced by County Fire Urban Search & Rescue (USAR) team members who treated the operation as a trench rescue. Additional dirt at risk of collapsing into the box was first shored, then rescuers began the task of removing all material that was trapping the victim who was buried up to his waist yet was awake and alert.

While the amount of debris that had to be removed was significant, heavy equipment is not appropriate for quick removal due to the close proximity of the victim and the chance of a collapse of unstable walls of material. Rescue personnel instead use hand tools, a process that takes considerable time but provides the highest level of safety for the victim and rescuers.

Additionally, paramedics prepared for the unique challenges of managing the potential for crush and compartment syndromes due to the extended period or entrapment.

According to a tweet by San Bernardino County Fire, the man was successfully rescued just before 9:00 a.m. It took just over two hours to safely remove the victim from the underground pit. He was packaged and taken to the landing zone to be airlifted.

Four engines, one heavy rescue, one squad, two safety officers and a chief officer totaling 27 personnel were assigned to the incident. Apple Valley Fire Protection District assisted with one engine, a rescue unit and three personnel. 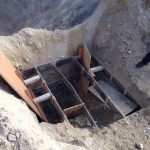 View of grate from above hopper. Rescue personnel removed material from over the grate and began digging down to the victim located a few feet below. (Photo courtesy of the San Bernardino County Fire) 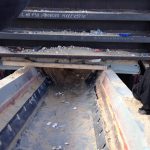 View of conveyer as it comes out from below grade hopper. Victim reportedly entered from this point and was engulfed by falling material. (Photo courtesy of the San Bernardino County Fire) 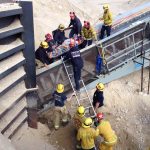